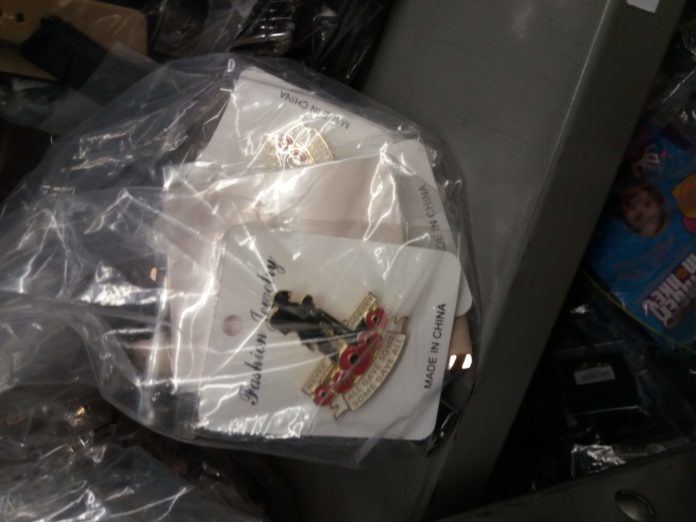 A shameless North Manchester trader who sold fake Remembrance poppy brooches has been hit with a huge fine after being convicted at Manchester Crown Court.

On Thursday December 5, the director of Blinge Ltd, Sarajuddin Atai, 50, of Woodlands Road, was convicted of 13 trading standards offences.

In September 2017 officers for Manchester City Council Trading Standards detected Blinge Ltd, trading as HF Jewellery in Manchester, was selling a large range of counterfeit merchandise after carrying out an inspection.

Among a collection of ‘designer’ brands including Apple, Cartier and Vivienne Westwood, poppy and Remembrance themed brooches were also on sale in the shop. None of these items were genuine or in any way connected to the official fundraising arm of the Royal British Legion.

A total of 225 pieces of Remembrance jewellery were seized by Trading Standards officers, contributing to a total of 1,407 counterfeit items recovered.

Following a lengthy legal battle, the company and Atai eventually pleaded guilty to all the offences. Atai was sentenced to a six month jail sentence, suspended for 12 months, and to carry out 150 hours of unpaid work. He was also ordered to pay prosecution costs of £5,000. The company was also ordered to pay a fine of £13,000 and prosecution costs of £5,000. A forfeiture and destruction order was also made .

When sentencing, Judge Conrad QC, highlighted the late entry of a guilty plea by the defendants and previous attempts to mislead the investigating officers and the Court. Atai had initially claimed he was sold the items in good faith, providing Trading Standards with an invoice for the goods which was later found to be fake. He also claimed to be unfit
to stand trial.

Jailed after he drove at almost three times the speed limit and killed...