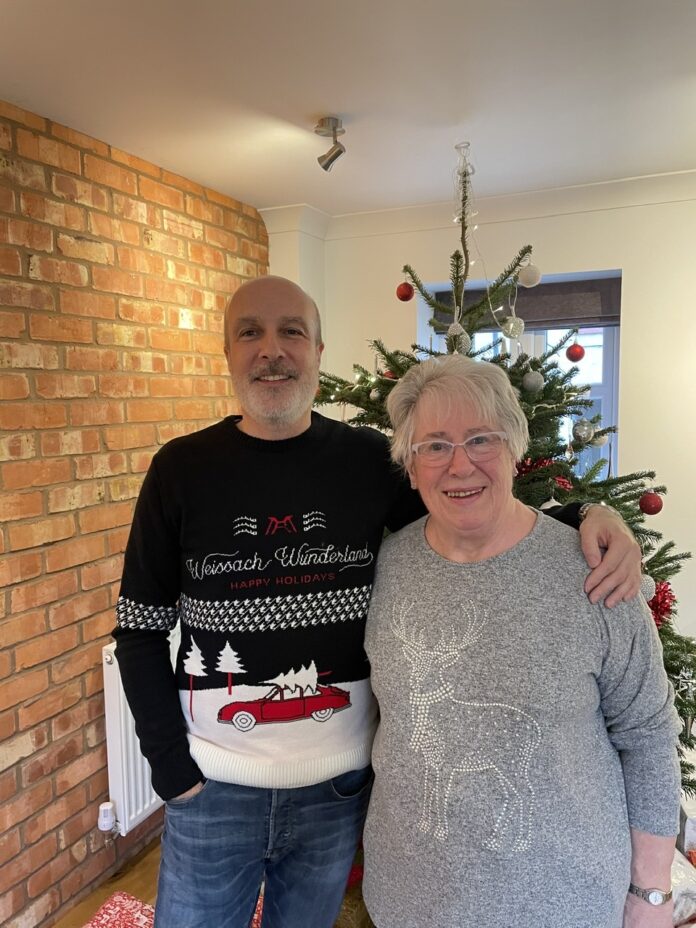 A church warden living in Heald Green, who has recovered from cancer twice, is celebrating being seven years cancer free.

Adrienne Staines had cancer of the caecum over 45 years ago, diagnosed just days after giving birth to her only son, Matt. She had surgery in South Wales and had around a metre of her colon removed.

In 2009, she could feel a pressure on her throat and a choking sensation. This turned out to be benign (non-cancerous) thyroid goitre – an enlargement of the thyroid gland. Adrienne had surgery to remove the growth.

“Then in 2013, I felt it again and knew something was wrong. I feared the worst,” said Adrienne. “This time it was thyroid cancer. But I was very philosophical, I didn’t panic, I just accepted it. As a Christian, I tend to think life is all mapped out in advance. What will be, will be.

“I had surgery on the thyroid at Wythenshawe hospital, but it wasn’t safe to cut too deep.

“After the surgery, I was encouraged to have radioactive iodine at The Christie to give me the best chance of beating cancer. For a week after the treatment, I was in a lead-lined room. Not having any company whilst I was in isolation was very hard, but I was given a free phone to keep in touch with my husband and my mum.

“The staff at The Christie were absolutely amazing. They are so understanding, practical and down to earth. They always find the time to have a conversation with you and they seem to know what to say to put you at ease. The staff do their very best, they are second to none.”

Adrienne has been fit and well since, though she does get a dry mouth from time to time due to damage to the salivary gland following treatment and has annual follow up appointments at The Christie each July. She takes levothyroxine medication daily, to replace the thyroid hormones and minimise the chances of cancer returning.

Dr Claire Arthur, consultant clinical oncologist at The Christie, said: “The long term effects of thyroid cancer and its treatment can be challenging for patients. Lifelong levothyroxine medication requires regular blood tests and dose adjustments may need to be made. Our follow-up appointments provide an opportunity to continue thyroid cancer surveillance but also to enquire about the individual’s wellbeing.

“Thyroid specialist nurses, such as Debbie Elliott at The Christie, play a key role in ensuring that patients continue to have access to information and support services following their initial thyroid cancer treatment.”
Despite being aged 79, Adrienne continues to be active as church warden for Emmanuel Church in Cheadle Hulme and enjoys reading and dining out with friends when the COVID-19 restrictions allow.

Adrienne said: “There are a lot of people who still think cancer is a death sentence and as a church warden I’m used to talking to people about it and hopefully giving them reassurance. I do understand how terrifying the unknown can be though.”

Sadly, Adrianne lost her husband Norman, a retired chemical engineer and lecturer, in September 2020, at the age of 89. They had been married for 51 years. Norman died just a few days after Adrienne’s mum, who had reached the age of 100.

Adrienne’s only son Matt is now fundraising for The Christie charity, through his membership of the Porsche Club North West. “Matt was always into cars as a boy,” said Adrianne. “He could spot almost any make or model in a flash when we were out driving and had a big Porche poster on his wall.”

Matt, from Kingsley near Frodsham, is the regional organiser for the Porsche Club North West, which has pledged to make The Christie its charity of the year for 2021.

It will be raising funds for The Christie at Macclesfield, a new cancer centre that will provide care for around 1,500 existing cancer patients a year from Cheshire, the High Peak area of Derbyshire and parts of North Staffordshire.

Matt’s wife Jeanie, who was also a member of the Porsche club, tragically passed away suddenly in July 2019 as a result of an undiagnosed brain tumour.

Matt said: “I’m just one of many members of the club who have had their lives touched by cancer. But we all know that by supporting The Christie we are doing something positive for cancer patients and their families and that the new Christie at Macclesfield centre will make a massive difference.

“Losing Jeanie was a huge shock. She was very likeable and memorable. Jeanie was gentle and caring and also professionally very successful. As a territory manager for the pharmaceutical company Abbott in the North West, she won multiple awards.
“When I lost Jeannie, I got a huge amount of support from other members of the Porsche club and it really helped me get through it.”

The Porsche club has around 1,200 members throughout the North West who organise around 25 events and activities each year for their members and the public including monthly ‘Saturday drives’ to places like the Lake District, the Peak District and North Wales, private events at Porsche dealerships to showcase new models and a track day at Anglesey in North Wales.

The highlight of the year is the Gold Cup event held over the August Bank Holiday at Oulton Park with around 240 Porsches on display. They donated £1,200 to The Christie charity in December last year.