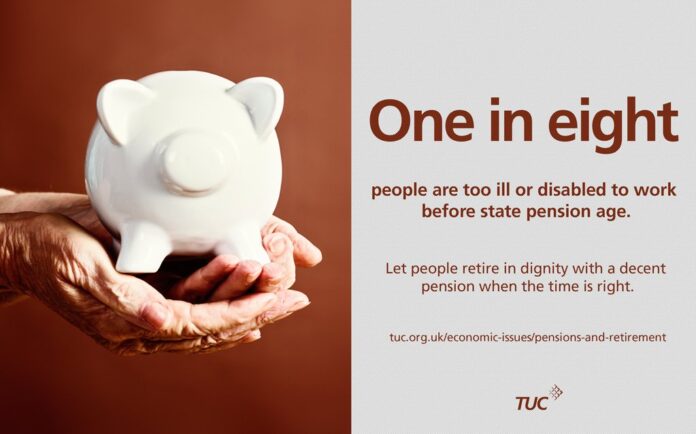 The TUC has today warned that hundreds of thousands of older workers are being “consigned to poverty” due to ill health.

A new report published by the union body shows that 1 in 8 (12%) men and women are forced to stop working before state pension age due to ill-health or disability.

The report – Extending working lives: how to support older workers – finds that more than half a million workers aged 60 to 65 have had to leave the workplace due to medical reasons.

The report reveals a stark income and class divide.People who left the labour market early while working in low-income jobs – like cleaning, care and manual labour – were six times more likely to quit due to medical reasons than those in higher-paid jobs.

The analysis also shows clear regional disparities.In the South West of England and the West Midlands 1 in 12 people aged 60 to 66 have left work due to long-term sickness or disability.

But this rises to 1 in 7 in Yorkshire and the Humber and Wales,1 in 6 the North East and 1 in 5 in Northern Ireland

The TUC says this reflects huge health inequalities across the regions and nations of the UK.

The TUC says that plans to hike to the state pension age while the healthy life expectancy gap between rich and poor areas is growing would deepen inequalities further.

Healthy life expectancy for women in the most deprived parts of the country is falling, and if the scheduled increases go ahead, by the end of the decade they can expect more than 16 years of ill health before they can draw their state pension.

The TUC is calling on the government to urgently work with unions and employers on developing training programmes for older workers.

Older workers who lose their jobs as a result of the pandemic will face greater barriers getting back into work, warns the union body.

And they are twice as likely as younger workers to become long-term unemployed.

The union body says that those in physically intensive jobs need help retraining so they can extend their working lives.

“People should be able to retire in dignity with a decent pension when the time is right.

“But many older workers are being forced to stop work earlier due to ill health. They must not be consigned to years of poverty.

“The government should stop plans for further rises in the pension age and focus on improving support for people who are too ill to work. And it should tackle the health inequalities that are causing it

“With healthy life expectancy falling for women in poorer areas ministers need to reverse this alarming trend – not make them wait even longer for their pension.”

On the need to provide re-training Frances added:

“Older workers have a crucial role to play in the labour market. But like everyone else they need access to decent training.

“This is especially important as we emerge from this pandemic. Many older staff are at risk of losing their jobs and we know they face extra barriers getting back into work.”

£1.5 billion vision to turn Greater Manchester into a world class region for cycling...