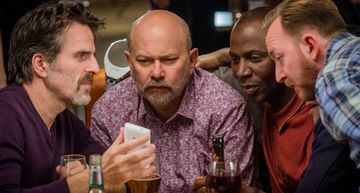 Sixteen years after Queer As Folk exploded on to the screen, award-winning writer Russell T Davies is back with Cucumber, Banana and Tofu, three new interlinked shows for Channel 4, E4 and online.

Cucumber set in Manchester and Banana are two original drama series exploring the passions and pitfalls of 21st century gay life, while Tofu is an online documentary series that explores all facets of contemporary sex culture.

While Lance gets to know the mysterious Daniel, Henry soon finds himself house-sharing with unexpected companions. The beautiful Freddie and 19 year old Dean have only been passing strangers, until now. But when they find themselves under the same roof they need to work out; are they friends or enemies

And then there’s Henry’s sister, Cleo played by Julie Hesmondhalgh, busy, professional, and a little chaotic. But coping with her three kids is easy compared to helping her brother…

“It’s kind of inevitable, and I’m really happy about that” says Russell T Davies about comparisons with Queer as Folk

“It’s me, writing about gay men in Manchester, so it’s unashamedly connected. It’s a really different show, but then I’m a completely different person now, and a completely different writer. But of course there are similarities, and I’m happy about that. If you’re going to have a legacy, Queer as Folk is a lovely one. I still love that show, I’m still immensely proud of it and still pleased if anyone’s ever seen it and comments on it. I’m happy to embrace that, I just don’t want people to think that they need to remember what happened in a show 16 years ago in order to watch this. In that respect, the two are totally different shows. This is completely freestanding and starts from scratch in episode one. That’s the only thing I want to make clear. But if you remember it, hooray, I hope you remember it with a big smile on your face.”

Cucumber launches on Channel 4 at 9pm on Thursday 22nd January with Banana following at 10pm on E4, and a serving of Tofu at 10.30pm on 4oD