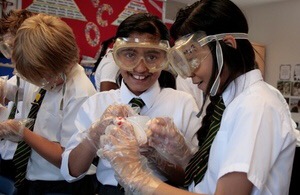 Oldham and Salford’s schools are is in the bottom thirteen performing schools where less than 60% of children attend good or outstanding secondary schools and which have lower than average attainment and progress at GCSE level.

The report out today from Ofsted which warns on a growing divide between the North and the South of the country.

The watchdog’s annual report on education standards says about a third of secondary schools in the North and the Midlands are not good enough.

Presenting the annual report, England is “a nation divided at the age of 11” Her Majesty’s Chief Inspector, Sir Michael Wilshaw said.

Sir Michael said there is much to celebrate about England’s schools. More children are currently in good and outstanding schools than ever before. Primary schools in particular are excelling, with 85% now rated good or outstanding, up from 82% last year.

However, the report notes that while secondary schools have improved slightly, the gap between primaries and secondaries has not narrowed. More worryingly it reveals that underperforming secondary schools are concentrated in the North and Midlands, where 410,000 children attend a secondary school that isn’t good enough.

“If left unaddressed the consequences will be profound. Our society, our future prosperity and development rely on the better education of our children. As things stand, too many secondary schools in the North and Midlands are failing to equip young people with the skills and knowledge they and the country need.” And added that

If Liverpool, Manchester, Leeds, Sheffield, and Newcastle are to be engine rooms of a Northern powerhouse, one of their priorities must be working with the towns on their borders to raise attainment and close skills gaps across a wider area.

In the region Trafford was the best performing authority with Manchester and Stockport both in the top half of the authorities when it came to Primary education but both were much lower in secondary education.

Although we have cause for celebration because of the fast pace of improvement in the primary phase, there is still a journey ahead of us in raising the quality of provision in the region’s secondary schools. None of the key stakeholders involved in school improvement can afford to step back or be complacent. There are still 113,450 pupils attending secondary schools that either require improvement or have been judged inadequate. We need to draw on the very best practice in our primary schools and ensure that secondary leaders continue that strong trajectory from the very start of Year 7 in secondary schools.