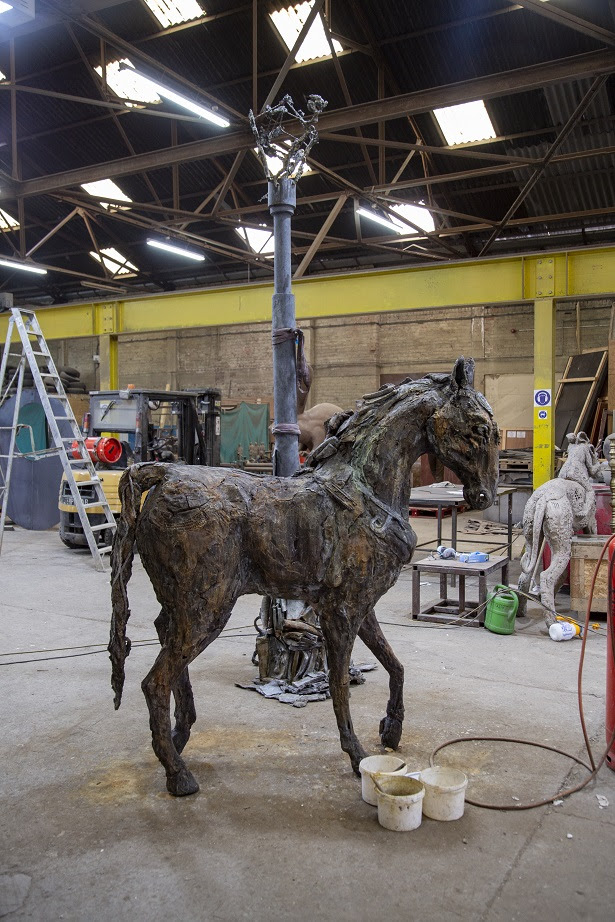 The city that had England’s first public library, first public park, and first horse drawn tram service – amongst many others – has celebrated with a stunning new sculpture.

A cast bronze horse and lamppost decorated with symbols of Salford’s pioneering history and famous sons and daughters will be unveiled in Bexley Square on Wednesday September 8.

The symbols include the Bridgewater canal, train tracks, books, Vimto (first factory in Chapel Street), a poppy for World War One heroes and famous Salford sons and daughters such as L.S. Lowry, James Prescott Joule (creator of the Kelvin scale) and Emmeline Pankhurst (votes for women).

The horse is also covered in messages and sayings from famous Salfordians, including Peter Hook, John Cooper Clark, Graham Nash and actor Albert Finney and a small dog is cocking its leg up the lamppost in tribute to artist Harold Riley, famous for his drawings of local dogs.

The statue commemorates a series of English firsts that happened in Salford:

First and only swing aqueduct in the world – Barton Aqueduct 1893

Funding for the sculpture by world-renowned artist Emma Rodgers, famous for her Cilla Black statue in Liverpool, came from developers X1 who transformed nearby former Salford Town Hall into apartments.

‘Growing concerns’ over use of Tasers as police watchdog calls for more scrutiny following...