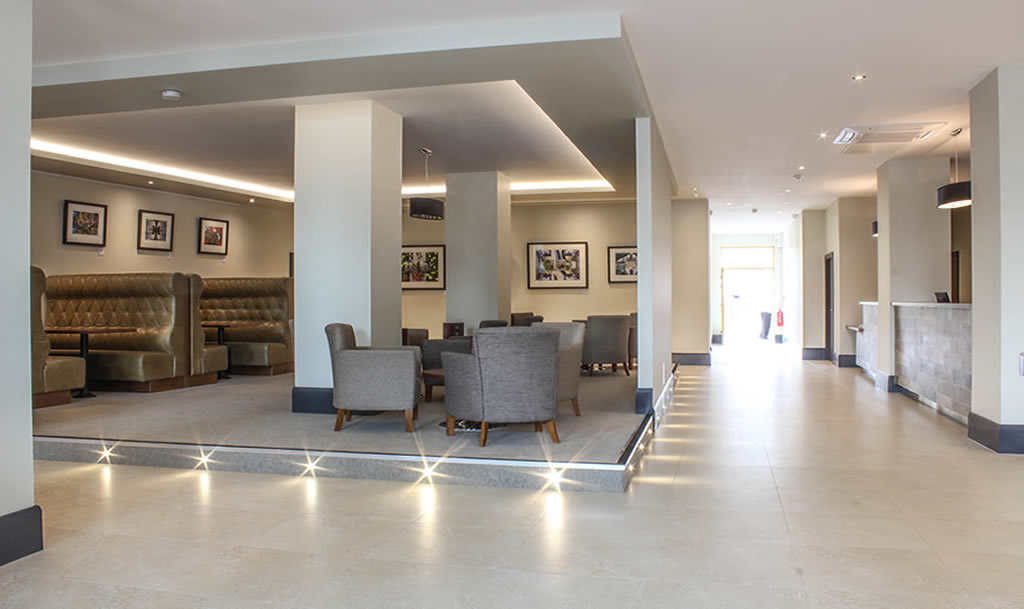 “Busy” says Paul Wadsworth when I asked him what is was like to be the General Manager of a hotel.
The Hotel is The Ainscow Hotel & Spa, situated, if you are not aware at the bottom of Chapel Street in Salford, owned by Artisan Investments, open for just over two years

“To be fair, it’s fun, you have to love this industry” he adds.
“We are still establishing ourselves in the marketplace and although we have been successful since we have been open, we are continually improving, no two days are the same”

This year has seen several improvements notably being the first hotel in the country to be able to offer whole body cryotherapy with the inclusion of a Cryotherapy Sauna and so far boasting Manchester’s only Cryotherapy Spa. The Salford Suite, offering a new meeting room with space for 60 delegates, as well as private dining and a stunning South facing roof terrace with unrivalled panoramic view of both Manchester and Salford, which is already proving popular for weddings.

The Lynwood Restaurant & Lounge has also been revamped since opening and they are currently building self contained loft apartments to provide exclusivity.

“Ever evolving and always improving as much as we can.”
It is a challenging role for Paul, always mindful of what is going on, he will try to be in before seven in the morning, avoiding the early morning traffic and not leaving until around seven in the evening. But of course those hours can change, an event or a busy restaurant will see him staying later, making sure that everything and everyone is in place.

The hotel bears his personal imprint. When he came on board, he tells us, it was much a case of ‘there is your building, build it and they will come’, he jokes.

Paul wanted to create an ambiance that when you walk in, you are made to feel welcome, I can certainly testify to that, “ you are not walking into that whole corporate environment where it is yes sir, no sir, three bags full sir.”

He believes that the team that he has built around him should have the freedom to express themselves, the recruitment process was based as much around personality as it was skills and experience, the hotel worked with The Broughton Trust and Salford Council in the recruitment process, they were looking for people who would make guests feel at ease when they walked in, not afraid to sit down and talk with the customers, the reviews testify to that.

The reception team has gone unchanged in the two years since opening, something that Paul is rightly proud of.

Of course the hotel trade across Manchester has expanded greatly and competition is fierce. The product at The Ainscow though is very different from the chains, no two bedrooms are the same and in fact rather than hotel rooms they’re more akin to loft-style living, a lot of the original features of the building were retained and of course there is the Cryotherapy.

For those not familiar, Cryotherapy is popular in sports and physiotherapy, as well as the beauty industry, celebrities including Jennifer Aniston, Kate Moss and Demi Moore are huge fans.

It provides natural non-invasive face and body lifts, inch loss and general skin improvements, using the latest in freezing technology. The frozen liquid nitrogen treatments trigger a reaction on the body to produce an array of results, from wrinkle reduction and muscle repair to lessening acne and easing migraines.

But back to the Ainscow. Paul’s ultimate goal is to become one of the prime city centre destinations. He believes that two years on, it is still a bit of a hidden gem, walking in from the outside carries you into a different world from what your aspirations might be thinking when you see the outside.

The hotel and leisure industry is becoming an important employment sector across Manchester. Paul himself has some 21 years hospitality experience, starting in 1995 at the Hilton Hotel Airport in Manchester as night porter, night auditor, night manager and front of office manager before working his way up at the likes of the Palace Hotel, Alias Hotel Rossetti Manchester, Ramada, Mercure Woodhey House Chester North before joining the Ainscow in 2014.

So what advice does he have for people wanting to come into the industry. “Stick with it”. It certainly isn’t easy, ridiculously long hours at minimum rates on starting, but the career prospects can be fantastic. You have to have a love for the industry, enjoy the banter.”

The rewards can be great. For a young single person, the world is your oyster. Paul recalls the best bit of advice he was given while with the Hilton Group, there for ten years, it was where he learnt the trade. He was told in one of those one to one meetings that to achieve his goal of managing his own hotel unit, he would have to move on, The Hilton, he realized, Deloitte all its accolades, was not the be all and end all of hotels. There were different opportunities and experiences to be learnt, different ways of working, different mind sets. Paul has taken the best of each hotel brand he’s worked with and created a special mix of inspired hospitality at The Ainscow.

As to the future, Paul, now aged 46, thinks that where he is now is probably the pinnacle of his career. Maybe he is also planning for the future, he sees several of his team having the abilities and the drive to reach the top.

10 reasons to visit the Lake District in August and September