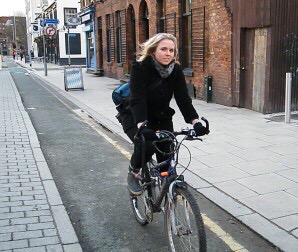 That’s according to research by Ribble Cycles ahead of National Cycle to Work Day this Wednesday.

The research found that in Manchester the petrol and parking expenses for driving to work is costing commuters an average of £1,816.79 – exceeding the UK average by £182.37 per year.

Figures obtained by Ribble Cycles from Just Park, Europe’s leading provider of pre-bookable parking, revealed that in Manchester the average cost of parking in the city is £1,322.40 each year, which is £283.98 higher than the estimated UK average.

This is in addition to the average £494.39 per year a commuter can expect to spend on petrol in Manchester

The study revealed that the cost of commuting by car goes beyond the financial, with the average Manchester commuter responsible for 1131.61 kgCO2e in carbon dioxide emissions each year by driving to work.

The annual cost of public transport can be just as expensive, costing on average £1,111 per for commuters in Manchester.

Transport for Greater Manchester is aiming to re-shape the region to make cycling to work more accessible to commuters while curbing CO2 and noise pollution in the city.

Between 2011 and 2018 more than £42 million will be spent on improvements to cycling in Greater Manchester as part of their Cycle City programme. This includes running free adult cycling training sessions, developing a major network of cycleways and improving cycling facilities at stations, schools and workplaces to make travelling around the region by bike easier, safer and more convenient.

Sustrans are a leading UK charity that aim to encourage people to travel in ways that benefit their health and the environment. By 2020 they want 4 out of 5 of local journeys to be made by bike, foot or public transport .

Rosslyn Colderley, Director for Sustrans in the North of England, said: “It’s just not sustainable to have thousands of people driving to work every day. Greater Manchester is seriously congested, we have a surge in illnesses related to inactivity and air pollution levels are soaring. It makes sense to invest in making our cities attractive places to walk and cycle.”

Matthew Lawson, Chief Marketing Officer, at Ribble Cycles said: “The cost of commuting to work each day in Manchester is expensive, and with petrol and rail fare prices increasing, it is set to get worse. Many commuters feel this is an unavoidable cost, but it needn’t be if they opt to cycle to work instead.

“There are many great cycle to work schemes available which give cyclists the option to pay for the bike in small, tax-free instalments each month, making owning a bike much more affordable, which will hopefully encourage more people to hop on their bike in the morning.”

Oldham’s Market traders rally to the cause