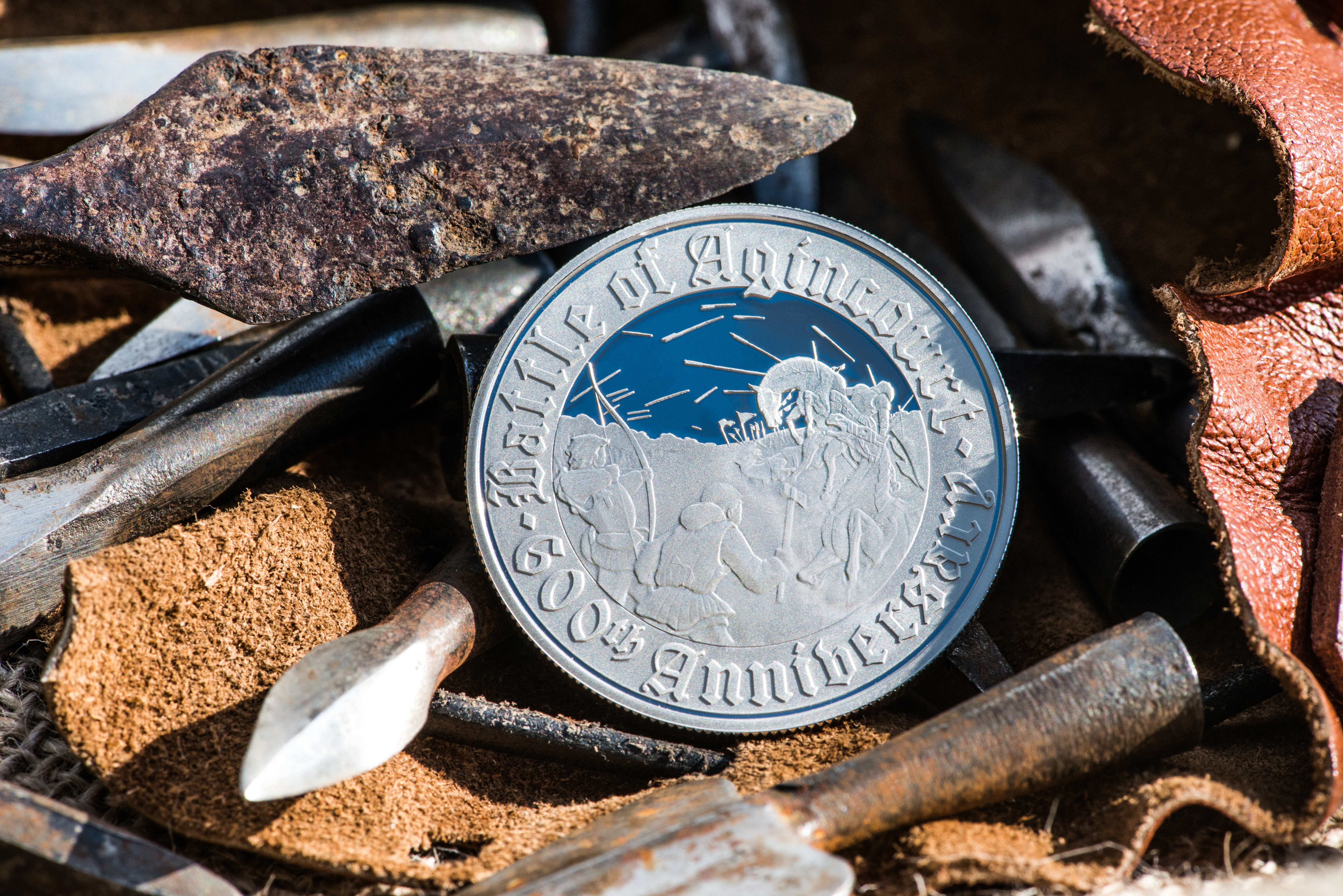 Under a sky that was said to have grown ‘dark with arrows’, the Battle of Agincourt took place on 25 October 1415. It is still regarded as one of history’s greatest military victories for England’s King Henry V, and a pivotal moment in the Hundred Years’ War between the Kingdoms of France and England.

Now The Royal Mint, one time maker of coins for King Henry V himself, has struck limited edition ‘Alderney’ £5 coins in gold and silver marking the 600th anniversary of The Battle of Agincourt .

Characterised by the muddy terrain, the deadly longbows used by the English and Welsh archers, and the strategic tactics employed by King Henry V, the Battle of Agincourt story may date back six centuries, but it is still documented to this day in literature and on stage in William Shakespeare’s Henry V.

The coin has been designed by Royal Mint Engraver, Glyn Davies, whose design for the Battle of Agincourt coin places the audience right at the heart of the scene:

“The idea behind my approach to the design was to show the overwhelming odds against the diseased and weakened English army that defeated that of the French. Although the battle is famed for the use of the Longbow, much of the disaster that befell the French army was, however, due to their belief in a chivalrous code of conduct.

I tried to get a sense of the mayhem and confusion that the French forces fell into and the significant role the archers performed in the battle. The design shows a lightly armoured archer in the foreground with a hatchet or hammer, weapons thought to have caused damage and deaths to the French knights as did suffocation in the mud. The French are depicted in heavy armour and on horseback. Trees surround the field as they also played a significant role in the French defeat.”

The Royal Mint’s Director of Commemorative Coin, Anne Jessopp, said, “The Royal Mint has been producing coinage for the kings and queens of Britain for over 1,000 years, including coins from the reign of King Henry V, so it is apt that in 2015 we should mark this important anniversary in celebration of the peace and reconciliation that has come to pass in the 600 years since it took place.”