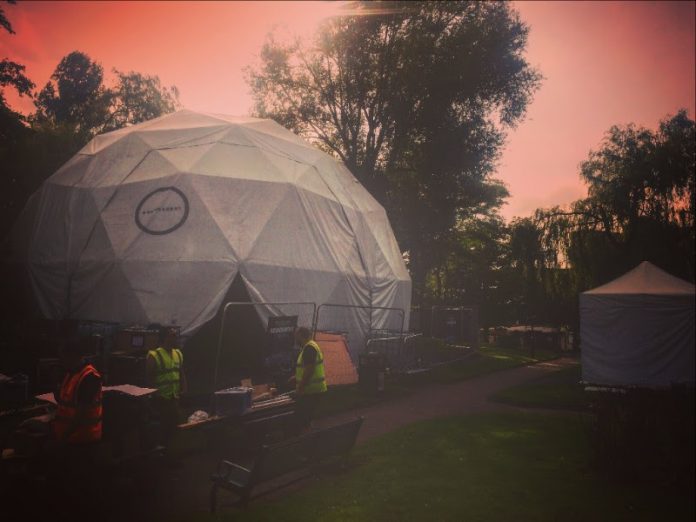 Following Roundabout’s successful run at The Lowry in 2015 and the Love Eccles Festival in 2016 the world’s first pop-up and play theatre will now be positioning itself within Peel Park, Little Hulton from Thu 7 September until Sun 10 September.

The theatre-in- the-round will also be at the heart of the inaugural Little Hulton Goes Large Festival on Sat 9 September hosting a multitude of events by and for the local community.

Young performers from Little Hulton will tread the boards within Roundabout showcasing their talents in a selection of song and dance. Local Primary Schools from Little Hulton, including Wharton, St Andrews and St Pauls will come together to form a community choir for a one-off performance.

Congregations from Little Hulton will join together to sing their favourite hymns and there will also be performances from Bethany Family Worship Centre Sunday School Choir and local DJ’s.

Known for his appearances on Live at the Apollo, Phoenix Nights, The News Quiz and Fighting Talk northern charmer Justin Moorhouse will commandeer the stage on Thursday evening.  Justin’s had a think about people. And feelings. About people Justin knows, their feelings and how he feels about them. And they about him. Culminating in the show he will present at Little Hulton Goes Large People & Feelings.

Award-winning Elinor Cook tells a tale of friendship, love and rivalry over 30 years. Out of Love is the story of Lorna and Grace, best friends forever. But when Lorna gets a place at University, and Grace gets pregnant, they find themselves in starkly different worlds.

Black Mountain, written by Brad Birch, is a psychological thriller about betrayal and forgiveness. Rebecca and Paul are running away from memories and mistakes. An isolated house in the country seems the perfect escape. But you can’t run forever, especially when you’re being followed.

The third piece, by Mancunian writer Sarah McDonald-Hughes, is a performance for all the family. Her work entitled How To Be A Kid tells a larger than life tale of family, friends and fitting in. Containing dancing, chocolate cake and an epic car chase.

Roundabout’s appearance in Peel Park, Little Hulton is part of an ongoing five year partnership between The Lowry and Paines Plough that began in 2015. The project will see the pair host annual new writing festivals across Salford, inviting local people to take part in festivals of new work in their home towns.

Julia Fawcett OBE, chief executive of The Lowry, said: “We fundamentally believe that our responsibility in terms of presenting work to audiences stretches far beyond the footprint of The Lowry building, or indeed the artistic choices of our creative team.

“Roundabout contributes significantly to that mission – not just because it presents work ‘on location’ so to speak – but because a central part of the line-up is programmed by the local community.”