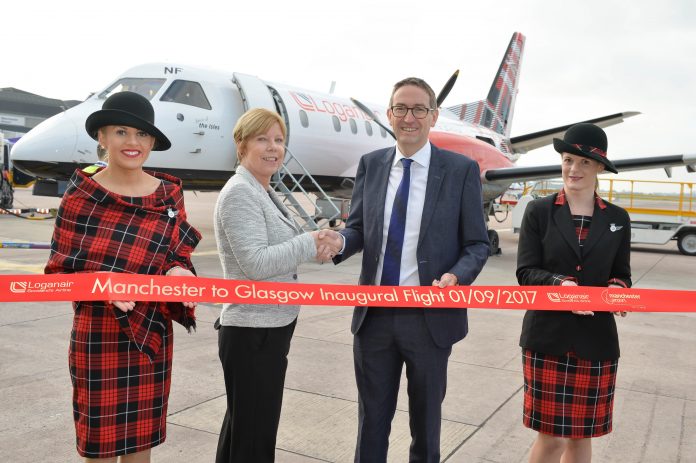 Air passengers travelling between Manchester and Glasgow can now reap the benefits of a 50 per-cent boost in service frequency, as airline Loganair officially flies solo from the beginning of September

Loganair, which has operated Flybe’s services between the two cities for eight-years terminated its franchise agreement with the carrier last week.

It will now be operating up to six services a day on the popular route, branded as Scotland’s Airline, with the inaugural flight going airborne 08.40 on Friday.

Kay Ryan, Loganair’s Commercial Director said: “We’ve been operating this route between Glasgow and the North West for eight-years so we’re acutely aware of the requirements for an enhanced schedule.

“A lot of passengers might not have been aware of the Loganair brand as we flew under our previous franchise partner’s colours but the quality of service was wholly down to the hard work of our team.

“It’ll be the same aircraft, pilots and crew which will be expanding the number of flights available to passengers. We’ve got an extremely competitive offering compared to other carriers including flexible fares, complimentary baggage allowance and exemption from credit-card booking fees.

“We are extremely grateful to our customers for the tremendous support they are affording us, which is translating into very strong advance bookings.”

In addition to the six-a-day Glasgow service, Loganair will be providing flights to Norwich, which it also previously operated under the Flybe franchise agreement.

In total, flights to Glasgow will operate 28 times a week, while Norwich will see 16 services per week.

From Manchester, Loganair will also offer excellent onward connections from Glasgow to the Highlands and Islands, meaning the North West will have access to the most beautiful and remote areas of Scotland for those travelling on business or leisure.

It has secured a codeshare agreement with British Airways, serving more than 200 destinations across the world.

Flights to Glasgow and Norwich both start from £49.99 each way including taxes. Bookings can be made now at www.loganair.co.uk