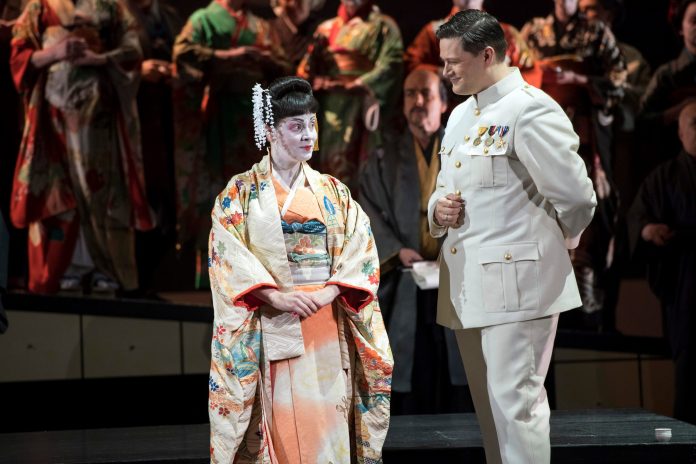 Someone once said that people don’t like opera,they only come for the interval.

Well if you came for the interval for Opera North’s adaptation of Puccini’s Madama Butterfly, I hope you stayed for the second act as Anne Sophie Duprel’s brilliant solo as she sings her heart out for the love rat Pinkerton, now a fully American women, the stars and stripes draped over the chair as she has renounced her Japanese culture for love.

This was a superb production of Puccini’s foray into Japan culture after he had attended a performance of American theatrical producer and playwright David Belasco’s one-act play Madame Butterfly, which recounted the tale of a Japanese girl’s ill-fated love for an American sailor.

It’s opening night did not go down well, incidentally, the audience openly jeered, booing and hissing throughout the performance, it’s Japanese theme mocked, and its tragic heroine was derided as a secondhand copy of Mimì from La Bohème. The composer withdrew the opera from performance after the opening night,twice making adjustments before it returned to the stage in 1904.

There is little wrong though here with Tim Albery’s production for Opera North, first produced back in 2007,it’s theme made even more pertinent against the current climate of the #metoo campaign as a fifteen year old Cio-Cio-San finds herself swept into a marriage with an American sailor who only ever planned to abandon her.

Hats off too for the brilliant performances of Ann Taylor as Butterfly’s servant Suzuki and Peter Savidge as the American consul while the young Lithuanian tenor Merūnas Vitulskis, makes his company debut as Pinkerton.

Set against the simplistic sliding set design of Hildegard Bechtler,the audience is easily transported back into Nagasaki at the turn of the 20th century with the backdrop of a Japanese snow capped mountain, sensually lit according to the seasons, while and the imposing music of Conductor Martin Pickard crashes across the production