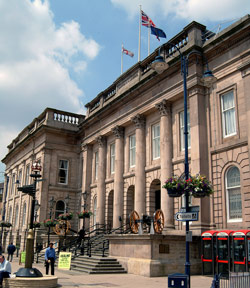 A new Civic Hub in Radcliffe to improve adult education and Renovating Bury market are among a number of projects in the region that will benefit from the Chancellor’s spending announcement.

Money was also allocated to community projects in Leigh and Marple while 50,000 each is being handed, through the Restoring Your Railway ‘Ideas Fund’ to develop three early stage proposals to reinstate passenger rail links between Ashton and Stockport

“This is just the news that we’ve been waiting for, and will be welcomed by our market traders, customers and visitors to Bury from far and wide.

“We were up against tough competition to win this money, and this is the culmination of two years of hard work by our market task force, which proposed in 2020 that we create a flexi-hall to help secure the long-term future of the market.

“Bury Market is rightly described as the jewel in Bury’s crown, which is why we did so much to support traders through the coronavirus pandemic. This investment – plus nearly £5m more from Bury Council – will bring regeneration and prosperity both to the market and the wider town centre area.

“The Chancellor announced today that projects in Bury and Ashton-under-Lyne are amongst 100 projects that will collectively receive £1.7bn of funding from the first round of awards from the Levelling Up Fund.

“Although significant, encouraging local authorities to bid – often against one another – for funds is emblematic of the piecemeal approach that has been adopted for the levelling up agenda and is not going to yield any long-term benefits.

Laws enforcing Lockdown Restrictions for Greater Manchester have been published (Five days after they...

Road bonanza for Manchester and Salford

Don’t loos out on this unique building