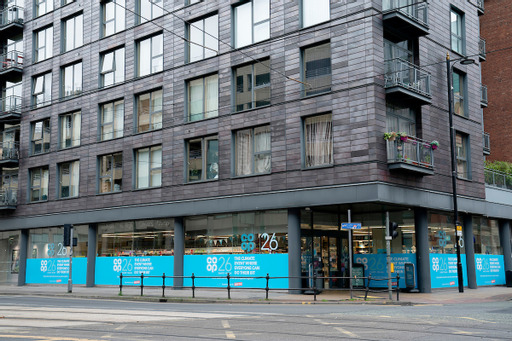 In a bid to engage customers throughout the COP26 conference and beyond, the Co-op26 campaign aims to get people asking questions about how they can impact climate change at a community level.

Six flagship Co-op stores across the UK have ‘rebranded’ to Co-op26 with amplified exterior signage and window vinyl takeovers to reflect Co-op26 and capture the attention of passers’ by. Continuing on the play on words, Co-op will also rebrand across its social channels to Co-op26 for the duration of COP-26.

In addition to the six flagship ‘rebranded’ stores, all of Co-op’s 2,600 food stores and 830 funeral care homes will communicate the same in-store messaging via marketing materials, including a full package of interior POS such as hanging boards, shelf edge labels and bunting, exterior bollard covers and in-store radio takeovers to encourage customers to get involved.

The Co-op26 campaign celebrates the retailer’s recently announced partnership with ‘Count us In’ which aims to encourage one billion people to take practical steps in their own lives to reduce carbon pollution. Count us In is made up of 16 simple steps which individuals can take to help reduce their own carbon impact, including eating more plants, switching energy suppliers, cutting down on food waste, repairing and reusing appliances, and sharing experiences with friends and colleagues to raise awareness around climate action.

Steve Murrells, CEO of The Co-op Group said, “Climate action needs to be truly accessible and inclusive in order to make the difference that’s so urgently needed. While the world looks to the COP26 conference to guide global leaders on how countries can accelerate change, we are shining a spotlight on how Co-op, our customers, members and colleagues can all play their part in the fight against climate change on a community level.

“Through the launch of the Co-op26 campaign and our partnership with Count us In, we want to grab the attention of communities all across the UK to get them thinking, asking questions and taking action, as well as equip them to use their voice and successfully activate the ‘tell your politician’ pledge.”

Ipsita Bhatia at Count Us In, said: “We are thrilled and proud to have Co-op as a partner of Count Us In. It’s incredibly powerful to see Co-op engaging their colleagues, members and customers, to take steps to reduce their own carbon pollution and add up to something bigger, together.”

The Co-op26 campaign builds on the publication of Co-op’s 10-point climate change action plan where the retailer pledged to radically reduce the carbon that comes from its products and operations, to become a Net Zero business by 2040 and announced that it will be the first supermarket in the world to sell fully carbon neutral own brand food and drink by 2025. This will be achieved by offsetting the direct greenhouse gas impacts of producing Co-op branded food and drinks, whilst neutralising the greenhouse gas emissions from running Co-op’s operations through carbon offsetting by the end of 2021.

The convenience retailer also made an industry-first move as part of its action plan to end the price disparity of vegan food and price match its plant-based range, GRO, to meat and dairy equivalents in store. In addition to the 10-point plan, Co-op also launched in July this year, Europe’s most extensive in store soft plastic recycling scheme, which means all Co-op own brand food packaging is completely recyclable.

To combat food waste, Co-op has a number of initiatives including its own food redistribution programme, FoodShare, which shares food with local community organisations. Additionally, Co-op recently announced its partnership with environmental charity Hubbub to fast-track the expansion of community fridges across the UK.

Community fridges are open to everyone in communities – without any need to be referred or having to prove eligibility – to share fresh food that would otherwise have gone to waste. The food is donated by businesses – with Co-op donating surplus food from its stores.

The time is right to increase freight by water