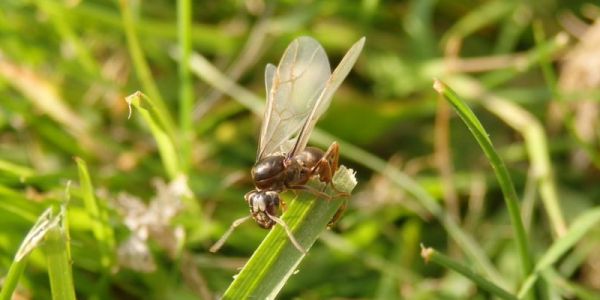 Researchers are asking everybody across the UK to help survey one of the most amazing phenomena in the insect world – when millions of ants take to the air for their nuptial flight.

Over the next couple of weeks, on warm humid days when there is little or no wind, ants emerge from their underground nests and take to the air. They aggregate into groups large enough to be seen on weather radar systems.

The species being studied is the black garden ant (Lasius niger).

Towards there end of the first week of July there were signs of flying ant activity over London. It is expected it will be seen over the south coast over the next couple of days before the phenomena is seen further north later in the month. Flying ant swarms were caught by the Met Office radar, as revealed in its tweet.

Among the flying ants taking to the skies will be virgin queens in search of a mate or mates. After mating, a queen returns to the ground, discards her wings and burrows back into the earth to create a new nest.

This is the only time she will mate. A queen can store the male’s sperm until she needs it to fertilise her eggs.

Dr Liz Duncan, Associate Professor at the University of Leeds, is part of an interdisciplinary project called BioDAR, which is investigating whether the UK’s weather radar network can be used to accurately survey airborne insect activity. As part of the study, Dr Duncan wants to compare citizen scientist observations with the data recorded by radar.

She said: “We need people from across the UK to report sightings of flying ants using our quick and simple online survey form. That way we can tell how good the weather radar system is in detecting insect activity. But to do that, we need as many reports as possible from people across the UK.”

No one knows what precisely triggers flying ant activity, although it is linked to weather conditions. The ants are likely to take to the air after a period of rain when it is warm, and conditions are still.

Swarms of flying ants are likely to be seen across the UK on warm days from now through to September. It does not happen everywhere on the same day. Flying ant activity tends to roll up the UK from the south of England, with each episode of flying activity lasting two or three days.

It happens in both rural and urban areas – and some localities may have several episodes of flying ant activity over the summer.

To report flying ant activity, please fill out this form.

Dr Duncan said: “Our work will allow us to better understand what triggers this phenomenon, building on past research into how weather affects when ants swarm. This research will also allow us to estimate how far they travel while in the air and how this may be affected by local weather conditions.

“We’re also very interested in how swarming activity differs between urban and rural areas, as what is known as the ‘urban heat island effect’ has been linked with earlier swarms in built-up areas.”

Ant life cycle
Ants are social insects, with a single queen in charge of colonies that can contain up to 10,000 individuals, depending on the species.

Most of the ants that people see in their gardens or inside their homes are workers ants – female and sterile. Once a colony has reached a certain size the queen ant starts to produce males and fertile females, which will become new queens.

The males and queens are born with wings.

By taking to the air, the queen ants are likely to mate with a male from a separate colony, increasing the genetic diversity of the offspring. Once back underground, the queens will spend the rest of their lives there, which could be up to 25 years.