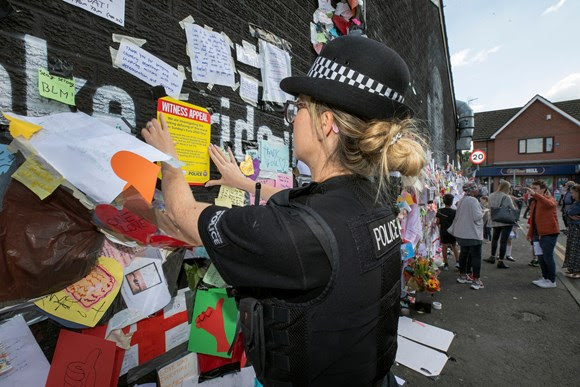 As Greater Manchester Police continue to investigate the defacing of the Marcus Rashford memorial in Withington, they have confirmed that the content of the vandalism is not believed to be of a racial nature.

Police say that they are keeping an open mind as to the motive behind defacing the artwork.

Investigators have been conducting several lines of enquiry including CCTV and forensic evidence from the spray paint used, results for which are expected to be returned in the coming weeks.

No arrests have been made and we continue to appeal to members of the public for any information they may have from Sunday night into Monday morning.

Superintendent Richard Timson, district commander for GMP’s City of Manchester division, said: “On Monday morning when we saw the damage done to the mural in Withington we were all left appalled, and we stand with the rest of the community whose solidarity against this vile abuse ever since has really shown the best of our city.

“The person responsible for this knows who they are and we believe there will be others who also suspect the identity of this offender, and I therefore urge anyone with such information to get in touch to help progress our enquiries at speed.”