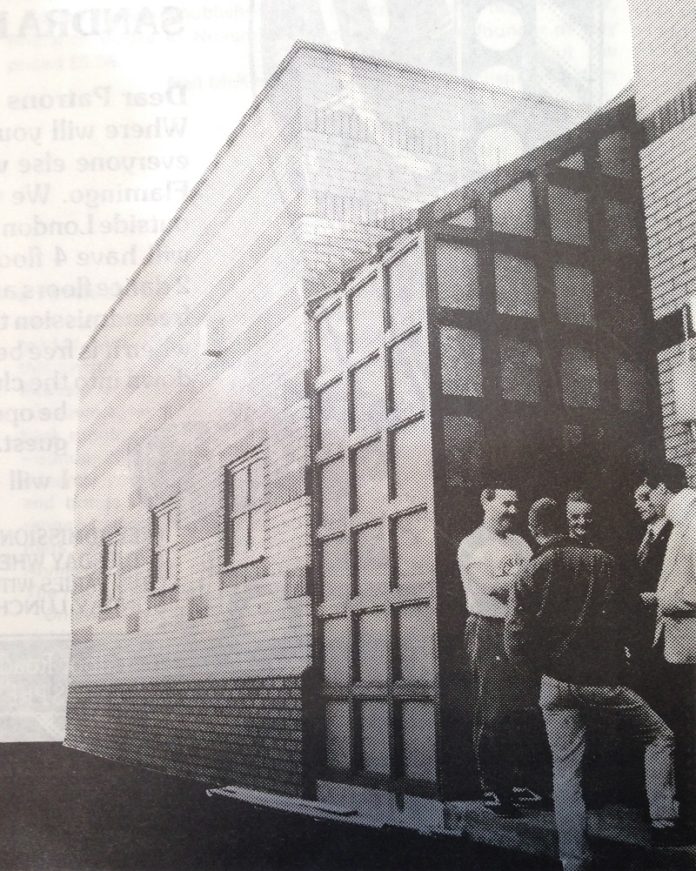 The history of Manchester’s LGBT+ Centre has been uncovered by a lecturer at Manchester Metropolitan University.

Emily Crompton, a senior lecturer at the Manchester School of Architecture, has delved into the archives to reveal the proud history behind the centre that is thought to be the only purpose-built and council-funded gay centre in Europe.

The centre was built in 1988 after years of campaigning while based in dingy basements, often coming up against prejudice from estate agents and landlords. The group secured council funding for the current yellow-brick community centre on Sidney Street across from Manchester Metropolitan University’s campus on Oxford Road, where it has served the LGBT+ community for the last 31 years.

The centre has housed many services including counselling, information phone lines run by volunteers and befriending and youth groups. In more recent years, the centre has also offered rooms for other support groups such as Alcohol Anonymous and opened a volunteer-run café.

Crompton said: “It was really interesting looking through the archives because the centre received huge support from the local authority, which was surprising considering how much stigma there was around being gay at that time.

“The funding was granted just before Section 28 came into force, so if the final push for the agreement over funding came any later then it may never have been built.”

Section 28 was a law introduced by Margaret Thatcher’s Conservative government that banned the “promotion” of homosexuality by local authorities and in Britain’s schools.

Crompton added: “Section 28 was intended to prevent a local authority from giving financial or other assistance to any person for the purpose of publishing or promoting homosexuality as an acceptable family relationship, or for the purpose of teaching such acceptability in any school.

“This context makes the decisions of our local authority all the more fantastic – at a time where gay rights were actively threatened by central government, Manchester continued to make decisions to fund a purpose-designed building for the gay community.”

But the decision to fund the new building, originally planned for a site on Canal Street – the centre of Manchester’s gay village, didn’t come without a small battle.

An opposition leader at the time led a fight to disapprove the recommendation for council funding, but their motion was outvoted by a huge majority – 57 against and only seven for.

Now, Crompton has turned her research into a heritage walking trail and has taken youth groups, older volunteers of the centre and school children around the city, educating them on the journey that the LGBT+ centre has been on.

Crompton said: “A lot of people that have been on the tour don’t know about the centre, so it’s been good to raise awareness. The younger people that come on the walk can’t believe the battle that we’ve had to get to this point, which just shows how far we have come today. Centres like these are so important because the LGBT+ community is unique – people are always going to have to ‘come out’ as being gay – they’ll always be the minority and I don’t think it’ll ever not be an issue.”

The project follows her long-term involvement with The Proud Trust – an LGBT+ charity that manages the centre. She started her project in 2015 when she was a practising architect and working on the centre’s new building.

She said: “The current building is just not fit for purpose anymore – it was very much built for its time with basic foundations and cheap materials. The windows were installed above head height to keep those inside anonymous. As an architect, working closely with The Proud Trust, a longer-term brief for the building was conceived. Over many years and engagements with users, staff and volunteers, the decision was made that it would be best for it to be completely demolished and rebuilt.

“The community have fought tirelessly over the years to keep the centre open and people are really connected to it, so it was a heart wrenching decision to demolish. It’s a really magical place and it had a difficult and at times conflicting brief but it will be more than worth it once it’s done.”

University of Manchester to carry out study into the role of gig workers and...

Manchester employment growth amongst highest in Europe, according to new research from JLL