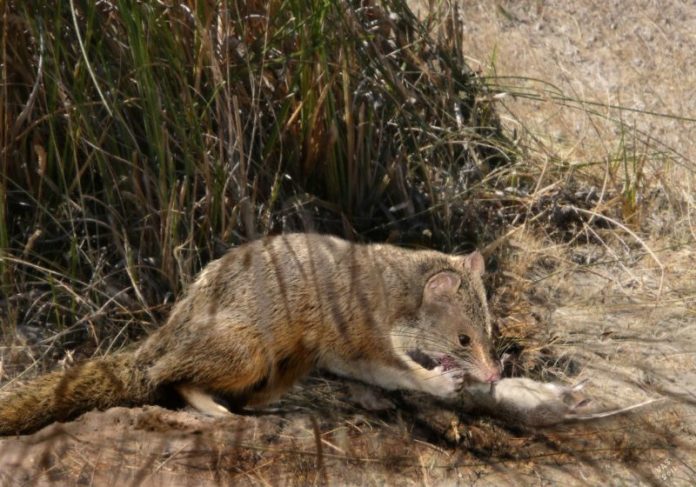 Short-tailed opossums are cute little marsupials which live in South America, but a new discovery shows they had a fierce fossil relative.

In a paper just published, a joint British and Argentinian research team have shown that a weasel-like carnivorous marsupial called Sparassocynus, is an extinct carnivorous relative of short-tailed opossums. Remains of Sparassocynus have been known for over a century, but its evolutionary relationships have been uncertain until now.

The new study, published in the Journal of Mammalian Evolution, by Dr Robin Beck, a mammal systematist at the University of Salford, and Matías Taglioretti, a palaeontologist at the Museo Municipal de Ciencias Naturales ‘Lorenzo Scaglia’ in Argentina, focused on a recently discovered four-million-year-old skull of Sparassocynus that provides key new information on the animal.

The skull was found in 2012 by Taglioretti and colleagues in a fossil deposit in cliffs along the Atlantic coast of Argentina, near the city of Mar del Plata.

Dr Beck said: “As soon as Matías showed me the skull, I knew it was really important.

“It’s almost perfectly preserved, and it’s not fully grown (it still has its baby teeth), so it preserves a lot of features that are not visible in other specimens.”

By comparing over a hundred different anatomical characteristics, and incorporating DNA evidence from living species, Beck and Taglioretti showed that Sparassocynus is an extinct member of the opossum family, and is most closely related to short-tailed opossums.

“This might seem surprising”, said Beck “because Sparassocynus was clearly a carnivore that would probably have eaten rodents and other small vertebrates, whereas short-tailed opossums are about five times smaller and mainly eat insects, but they share some unusual features that indicate a close relationship.”

Sparassocynus survived in South America until about 2.5 million years ago, when it may have been driven extinct by the arrival of weasels from North America. There are over 100 species of opossum still alive today in South America, of which 24 are short-tailed opossums.

New strategy for the future of Manchester’s parks proposed