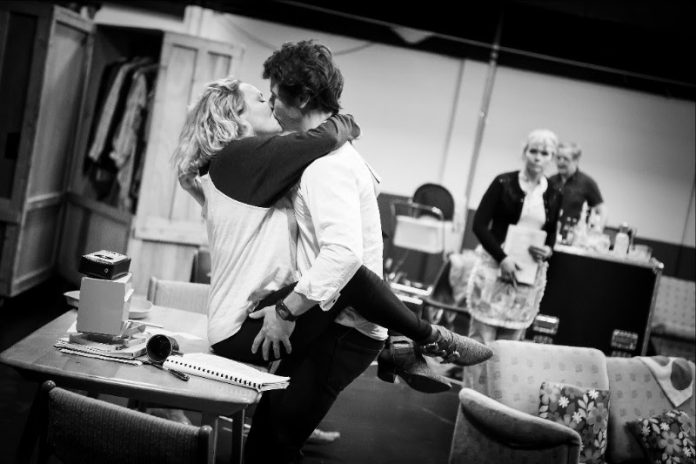 Rehearsal pictures have been released for Bill Kenwright’s production ofAlan Ayckbourn’s farcical tale of matrimonial mishaps, How the Other Half Loves as it gets set to thrill audiences across the UK this autumn. The 1969 classic and the first of Ayckbourn’s plays to be staged on Broadway, will be at The Lowry from Mon 11 – Sat 16 September.

The star cast includes leading stage and TV actor Robert Daws as ‘Frank Foster’, best known for the hit series’ The Royal, Outside Edge and Roger Roger opposite Caroline Langrishe as ‘Fiona Foster’ who starred in Lovejoy, Holby City and Judge John Deed.

Charlie Brooks, much-loved for her portrayal of EastEnders’ Janine Butcher performs as ‘Teresa Philips’ with Leon Ockenden, best-known for his role as Coronation Street’s Will Chatterton as ‘Bob Philips’.

Completing the couples are Matthew Cottle who reprises his critically acclaimed West End performance as William Featherstone, best known for the BAFTA-nominated Game On. Alongside him will be Sara Crowe as ‘Mary Featherstone’, who’s West End credits include Alan Ayckbourn’s Absurd Person Singular and The Constant Wife but perhaps is best known for her role in the popular film Four Weddings and a Funeral.

At turns heart-wrenching and hilarious, Ayckbourn’s tale of social graces and personal misunderstanding remains one of the celebrated writer’s most famous comedies.

As Bob and Fiona clumsily try to cover up their affair, their spouses’ intervention only adds to the confusion. William and Mary Featherstone become stuck in the middle, falsely accused of adultery and with no idea as to how they’ve become involved. The plot culminates in two disastrous dinner parties on successive nights, shown at the same time, after which the futures of all three couples seem in jeopardy.

An extraordinary success on opening in the West End in 1970 at the Lyric Theatre, How the Other Half Loves ran for a staggering 869 performances, delighting critics and audiences alike. Fondly loved and considered one of Ayckbourn’s most popular plays; How the Other Half Loves received its first major West End revival in 2016, where it once again thrilled audiences. Originally opening at the Theatre Royal Haymarket followed by an extended run at the Duke of York’s, it will now be delighting audiences across the UK.

2017 marks Alan Ayckbourn’s 56th year as a theatre director and his 58th as a playwright. To date he has written 80 plays and his work has been translated into over 35 languages. He became the first British playwright to receive both Olivier and Tony Special Lifetime Achievement Awards and was knighted in 1997 for services to theatre.

Major successes include: Relatively Speaking, Absurd Person Singular, Bedroom Farce, A Chorus of Disapproval and The Norman Conquests. In the past four years, there have been revivals of Season’s Greetings and A Small Family Business at the National Theatre and in the West End productions of Absent Friends, A Chorus of Disapproval and Relatively Speaking.

How the Other Half Loves is directed by theatre director and biographer Alan Strachan. Alan has directed plays in New York, Copenhagen and Amsterdam, but the majority of his work has been in London. He was Artistic Director of the Greenwich Theatre in London for over a decade, and has worked with, amongst others, Sir Michael Redgrave, Dame Penelope Keith, Maureen Lipman CBE, Sir Michael Gambon and Sir Alec Guinness. He came to early prominence as Alan Ayckbourn’s chosen director, and he has been involved with Ayckbourn’s theatre at Scarborough for many years.