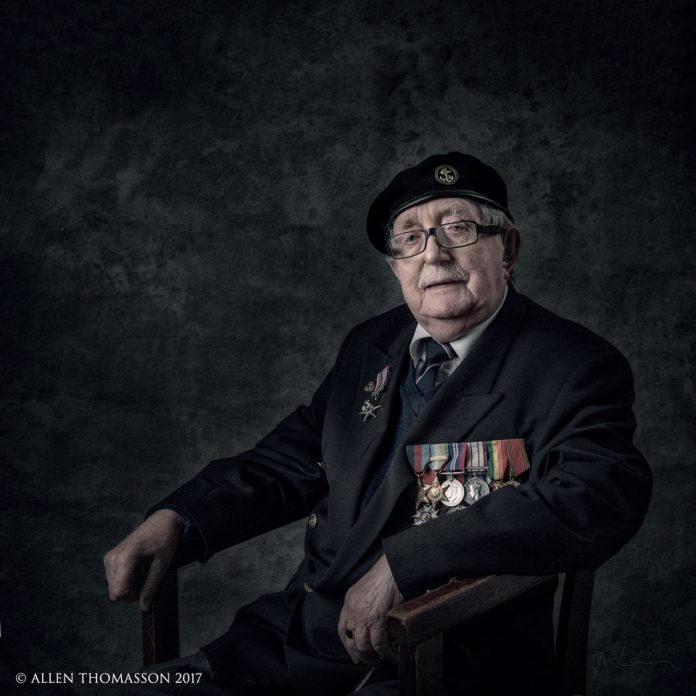 A Lancashire portrait photographer has teamed up with the Royal British Legion to capture and preserve the memories of World War Two veterans ahead of a unique exhibition.

Allen Thomasson has been travelling across the North West meeting war veterans, to share their memories and create their portraits.

He said: “I started two years ago and it’s become a real labour of love. I meet the veterans in their homes, we have a cup of tea and they tell their stories on video.  I also take photographs of them to create the portraits. I create a studio space on location to create their portrait.”

Allen said: “I’ve had the pleasure of meeting some incredible people, with equally incredible stories. My motivation is to preserve the memory of those who served in WWII and to capture their stories before they are lost to history.”

There is also a modern twist to the portraits, as Allen hopes to incorporate Augmented Reality technology allowing visitors to view interviews and additional images using a smartphone or tablet. Allen will also host public ‘Question and Answer’ sessions with some of the veterans during the exhibition.

Allen, a retired NHS theatre manager, has funded the entire project himself and is seeking funding to help support the project going forward. He said: “It has been a philanthropic project thus far, because I’m really excited to share some of these amazing stories with a wider community. It’s been a very humbling experience, and it will be particularly poignant to be able to stage this event in Stockport during the period of Remembrance as my first ‘sitters’ are members of the Stockport and Normandy Veterans Association and friends.”

During the exhibition, visitors will be able to make a donation to the Royal British Legion, the UK’s leading Armed Forces charity.  The Legion’s Area Manager Alison Bunn said: “The Royal British Legion is at the heart of a national network that supports our Armed Forces community through thick and thin, ensuring that their unique contribution is never forgotten, so we are genuinely excited to be part of this amazing project as we pass the torch of Remembrance from generation to generation.”

One of the people featured in the exhibition will be Royal Navy veteran Alan Johnson who was born in Gorton, Manchester in July 1925.  He enlisted at the age of 18.

Now 92, Alan still vividly remembers his escort duty, both in the Atlantic and safeguarding the passage of two Russian convoys past Iceland, which won him the Arctic Medal presented by the Russian Embassy.

He served on the Minesweeper HMS Onyx during the Normandy Invasion in June 1944, still three weeks short of his 19th birthday.  His ship joined the flotilla minesweeping towards the French coast in misty conditions, which obscured the coastline. HMS Onyx was actually close to a gun battery at Fleury, so the cover of the mist proved crucial.

Alan said: “Just after 5am the mist suddenly began to clear, and looking astern I could see from that horizon to that horizon nothing but ships and landing craft coming straight towards us.”

Councillor David Sedgwick, Stockport Council’s Cabinet Member for Reform and Governance, said: “A large number of veterans have come from all over the North West and it’s great to see their stories being shared to the wider community. This exhibition is an amazing tribute to the veterans and their families who have served this country and it makes sure that the next generation never forgets the sacrifice made by these men and women.”

Allen Thomasson is still looking for more veterans to capture on camera, and anyone who wishes to take part can contact him on 07938 950700.