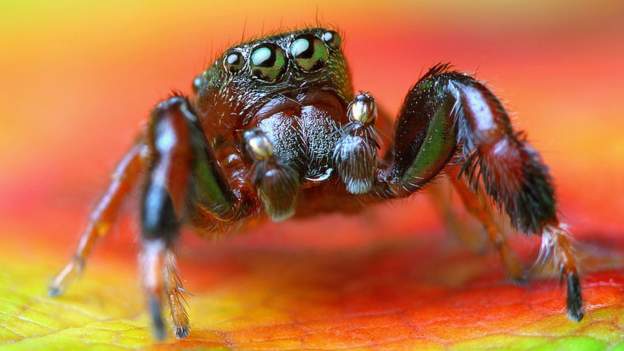 Arachnologist, Richard Burkmar, discovered a special tiny jumping spider, just half the size of a matchstick head, during a survey visit to the Cheshire bog in June. His discovery turned out to be a rare Sibianor larae – a species never recognised before in the UK.

The sighting was confirmed following an invitation for fellow arachnologist, Richard Gallon, to accompany him on a return visit to the site where they were able to find more examples of the rare spider. After studying the spider under a microscope, they both agreed it fitted the description of the continental species Sibianor larae.

Their next step was a visit to Manchester Museum to see world jumping spider expert, Dmitri Logunov, Curator of Arthropods at the museum, who confirmed that it was a Sibianor larae and was the first recognised sighting in Britain. He had originally described the species when it was new to science in 2001, naming it after his wife Larisa Logunov (Lara is an abbreviated form for Larisa).

Cheshire Wildlife Trust has carried out lowland raised bog restoration work at the site and is continuing to improve its condition. “We were delighted to hear about all the special discoveries that have been made at our Holcroft Moss Nature Reserve,” said Sarah Bennett, Area Manager West, part of the conservation team at Cheshire Wildlife Trust. “The site is particularly special as it has never been exploited and cut for peat; something which is unusual for most peatland in the UK. A number of other rare bog spiders were also discovered during the surveys, including the jumping spider Heliophanus dampfi, making it the only site in England where this has been recorded. It is definitely a special site for bog loving wildlife.”

Far from being a newcomer, this athletic moss-dwelling spider has almost certainly survived in bogs in the UK for thousands of years, but like much of our wildlife, may be suffering due to habitat loss. Indeed, following the discovery, an old Lancashire specimen from World Museum, Liverpool collected in 1924 has been re-identified by Dmitri as another Sibianor larae. It had been originally named as a similar species that seemed to only occur in south east England, but it came from a peat bog that has since been destroyed and is now a landfill site.

The team are continuing to seek out further museum specimens, which may help to piece together the spider’s former distribution, or indicate other sites where it could still be present. “Due to habitat loss there may, however, be no other suitable places left in Britain. Emphasising the importance of this site and undamaged bog habitat in general,” said Gary Hedges, Tanyptera Regional Entomology Project Officer at World Museum.

This discovery is part of a wider survey searching for rare spiders in Lancashire and Cheshire bogs, supported by the Tanyptera Trust.