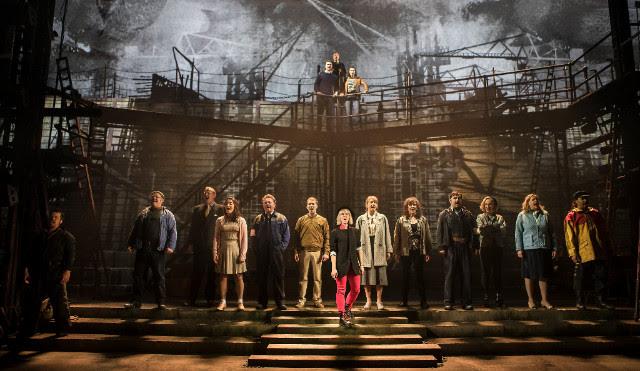 Production images released for critically-acclaimed show ‘The Last Ship’ with original music & lyrics by Sting which ends its UK tour by docking at The LowryTue 3 – Sat 7 July.

The production, which has a Tony-nominated original score and lyrics composed by Sting stars cast including Richard Fleeshman, Charlie Hardwick, Joe McGann and Frances McNamee.

The Last Ship, which was initially inspired by Sting’s 1991 album ‘The Soul Cages’ and his own childhood experiences, tells the story of a community amid the demise of the ship-building industry in Tyne and Wear, with the closure of the Swan Hunter shipyard.

When a sailor named Gideon Fletcher returns home after seventeen years at sea, tensions between past and future flare in both his family and his town. The local shipyard, around which the community has always revolved, is closing and no-one knows what will come next, only that a half-built ship towers over the terraces. With the engine fired and pistons in motion, picket lines are drawn as foreman Jackie White and his wife Peggy fight to hold their community together in the face of the gathering storm.

This personal, political and passionate new musical from multiple Grammy Award winner Sting, is an epic account of a family, a community and a great act of defiance. ‘The Last Ship’ features an original score with music and lyrics by Sting as well as a few of his best-loved songs; ‘Island of Souls,’ ‘All This Time’ and ‘When We Dance.’  It is the proud story of when the last ship sails.