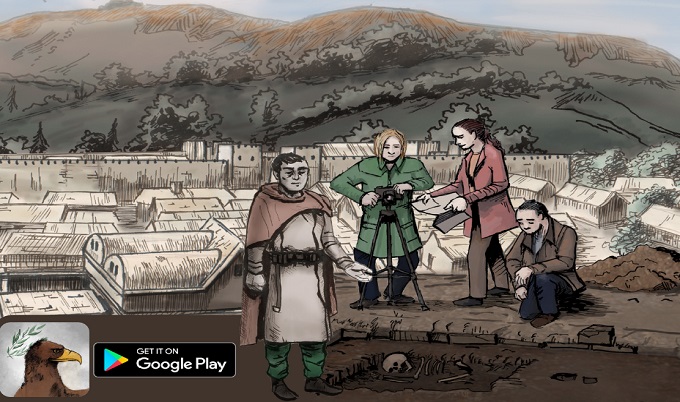 ‘The Missing Dead’ has been developed by experts at Newcastle University and the Vindolanda Trust and takes the player back in time from the discovery of the skeleton in 2009 to the 3rd century AD.

Using archaeological evidence excavated from Vindolanda, the game uses 2D, hand-drawn animation in a comic-book style to recreate Vindolanda as it would have been in c.230AD.

Guided by Aquila the Eagle, the game takes the player around different buildings on the site as they follow Marcus, a Tribune at the nearby Roman fort of Magna help his friend, Vitalis, to find a missing slave. Players must question the characters that appear in the game as they explore what life would have been like on the Roman frontier and learn about the diverse community that lived there.

At the end of the game, users can go to the museum at Vindolanda to see the real-life objects that appear as clues in the game. They can also see the skeleton and discover for themselves how archaeologists have used the information available to learn as much as possible about its past.

The game builds on the latest research carried out by Newcastle University on Roman Britain. Dr Claire Stocks, Senior Lecturer, said: “This project has been a fantastic opportunity for Newcastle University to work closely together with the Vindolanda Trust. We hope that this game will introduce young students and their families to our research in a fun way and that it will serve as a basis for future projects between Newcastle University and Vindolanda, as well as the heritage sector as a whole.”

Funded by Arts Council England, the app is aimed at Key Stage 2 students (7-11-year olds) but can be enjoyed by any age.

Barbara Birley, Curator at the Vindolanda Trust, said: “The Missing Dead app deals with difficult, real-life subject matter, but handles it with sensitivity. Students learn about their past in a way designed to make them ask their own questions and to piece together the clues and information they are given to help them solve the mysteries, just like a real archaeologist.”

The technical development of the app was led by Newcastle University’s GameLab, which has worked with many of the world’s top game studios since it was launched more than a decade ago. Although the team at GameLab have also worked on projects as diverse as stroke rehabilitation, diagnosing eye disorders and exploring Big Data in virtual reality, this is the first time that they have used video game techniques to enhance digital learning and present education in a fun and engaging way.

Dr Graham Morgan, who leads the research group based at GameLab, said: “The expertise among the GameLab team, which has been built up over many years working with the video games industry, has been put to good use teaching children what life was like in one of Rome’s most remote outposts. By using approaches and techniques found in popular video games we draw children into a story full of characters, places and objects while they explore Vindolanda.

“The excitement of collecting objects and eventually solving the mystery increases player engagement and awareness. This means their focus will not drift, no matter how many historical facts and figures the game delivers. The key to success is ensuring that such facts and figures are integral to the game itself. In this way, the power of video games is used to complement and intensify the educational experience as if the player were in a classroom.”

Alongside the app, activity packs have been developed in collaboration with Creative Assembly, a British video game developer behind the critically acclaimed Total War franchise. The cross curricular packs aim to boost children’s computing skills while also building literacy levels and embedding historical knowledge about the Roman empire, as well as gaining a better understanding of the skills involved in creating a game like the Missing Dead app.

Work on the app started in 2019, and in the final stages of development the Vindolanda Trust asked local schools to trial the game. Ann Hetherington, a retired teacher from Northumberland said: “These packs bring to life what it was like to live on the fort at Vindolanda 2000 years ago. The graphics are fantastic and have enough detail to satisfy the curiosity of the most observant pupil, while being archaeologically accurate. The idea of following the trail of a mystery gives many opportunities for further research and the packs point students to a range of places to find out more.”

‘The Missing Dead’ is free to download now on Android and IOS.