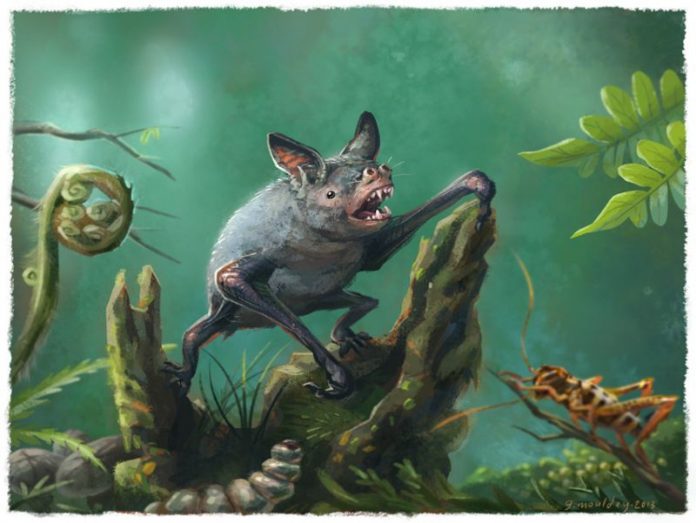 Teeth and bones of the extinct bat were recovered from 16-19 million-year-old sediments near the town of St Bathans in Central Otago, South Island. Burrowing bats survive today solely in New Zealand but the fossilised species belong to a bat superfamily that once spanned the southern landmasses of Australia, New Zealand, South America and possibly Antarctica.

These are peculiar bats because although they fly they also scurry about on all fours, over the forest floor, under leaf litter and along tree branches, while foraging for both animal and plant food. With an estimated weight of 40 grams, the new fossil bat was the biggest burrowing bat yet known and about three times the size of an average bat.

The new bat is named Vulcanops jennyworthyae after one of the team who found the fossils.

Professor Sue Hand, Director of the PANGEA Research Centre at the University of New South Wales, Sydney, who led the research, said: “Burrowing bats are more closely related to bats living in South America than to others in the southwest Pacific. They are related to vampire bats, ghost-faced bats, fishing and frog-eating bats, and nectar-feeding bats.”

Dr Robin Beck, lecturer in biology at Salford and formerly of UNSW, said: “This strange fossil bat is very different from the bats living in New Zealand today, and shows that we are missing a huge amount of their evolutionary history – I think we can expect a lot more surprises from this fossil site in future.”

Around 50 million years ago, Australasia, South America and Antartica were connected in the supercontinent Gondwana. Global temperatures were up to 12°C higher than today and a forested Antarctica was frost-free. With subsequent fragmentation of Gondwana, cooling climates and the growth of ice-sheets in Antarctica, Australasia’s burrowing bats became isolated from their South American relatives.

New Zealand’s burrowing bats are renowned for their extremely broad diet, which is as broad or broader than any other bat. “They eat insects and other invertebrates such as weta and spiders, which they catch on the wing or chase by foot, but also regularly consume fruit, flowers and nectar,” said Prof Hand. “However, Vulcanops’s specialized teeth and large size suggest it had a different diet, capable of eating even more plant food and also small vertebrates, a diet more like some of its South American cousins. We don’t see this in Australasian bats today.”

As the first new bat genus to be added to New Zealand’s fauna in more than 150 years, Vulcanops provides new insight into the original diversity of bats in Australasia. Its lineage became extinct sometime after the early Miocene, as did a number of other lineages present in the St Bathans assemblage.

These include crocodiles, terrestrial turtles, flamingo-like palaelodids, swiftlets, several pigeon, parrot and shorebird lineages and non-flying mammals. Most of these were probably warm-adapted species. After the middle Miocene, global climate change brought colder and drier conditions to New Zealand, with significant changes to vegetation and environments.

It is likely that this general cooling and drying trend drove overall loss in bat diversity in New Zealand, where just two bat species today comprise the entire native land mammal fauna. All other modern land mammals in New Zealand have been introduced by people within the last 800 years.

The St Bathan’s site has revealed a host of extinct species, including tuataras, moas, kiwi, acanthisittid wrens, leiopelmatid frogs, parrots, pigeons and many water birds, but also land turtles and crocodiles – two groups no longer found in New Zealand. This diverse fauna lived in or around a 5600-square-km prehistoric Lake Manuherikia in the early Miocene (16-23m years ago).

Manchester based No Offence returns for a third series