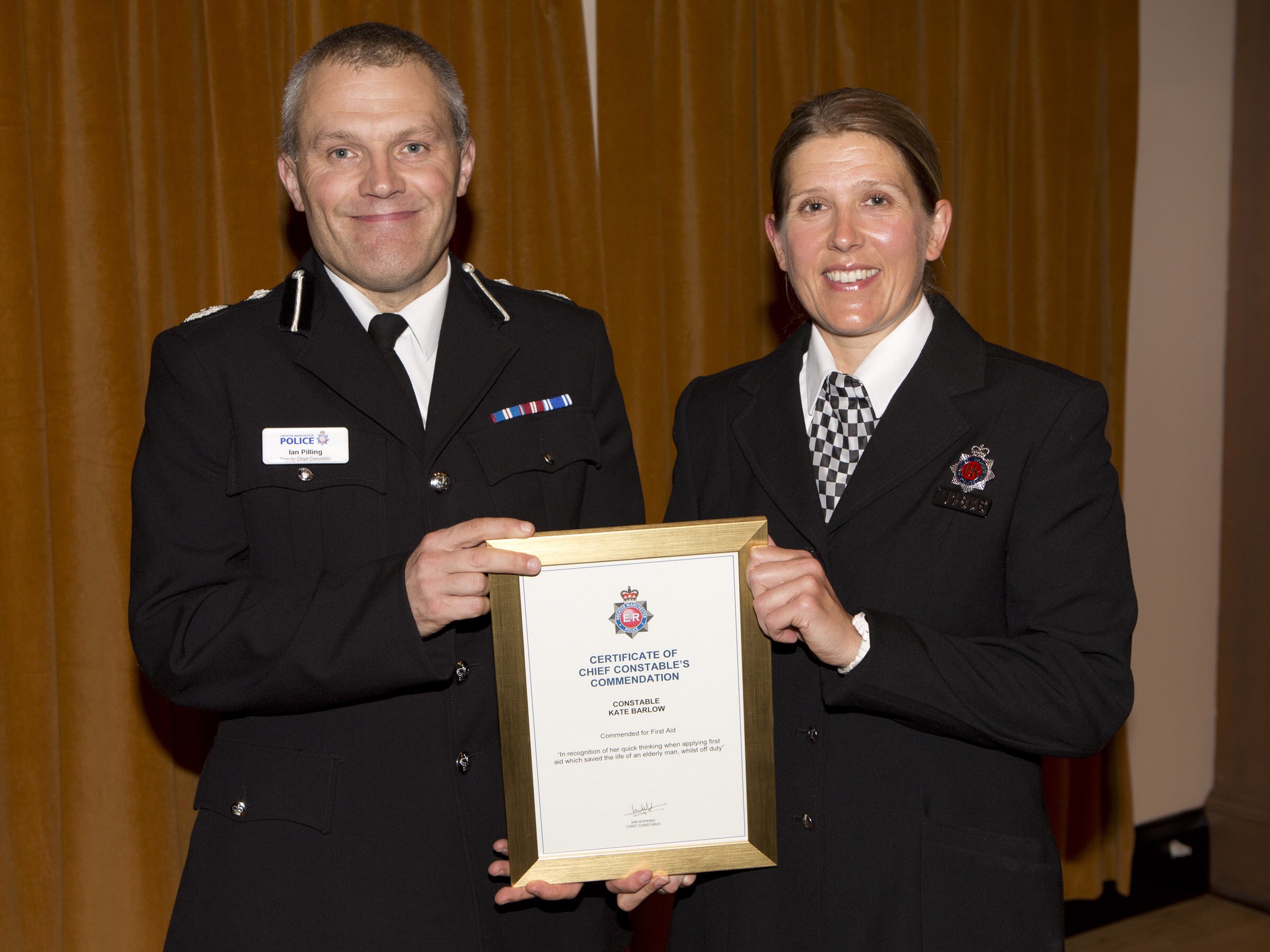 Greater Manchester Police Constable Kate Barlow has received a Chief Constable Commendation for her part in saving a man’s life with a heart defibrillator while on a train.

Kate, 44, from Buxton, had just finished her shift at the City of Manchester division and was on her way home aboard the four o’clock train from Manchester Oxford Road.

Shortly after the train left the station Kate became aware of an elderly gentleman snoring loudly in the seat behind her.

Some fellow passengers could be heard laughing at the sound the man was making.

As a train pulled in to Piccadilly Station the snoring noises suddenly changed, recognising the sounds as a sign of something potentially more sinister Kate approached the man, whose face had now turned ashen grey, and attempted to wake him with no success.

Without warning the man stopped breathing and immediately Kate shouted out for an ambulance to be called.

Four members of the public came to aid Kate in helping the man. Luckily, three were trained nurses and another was a former member of the British Transport Police (BTP).

The group laid the man down across the seating. Kate, who is trained in first aid, quickly undid his tie and top shirt buttons and began to perform CPR to no avail.

As the train was still at Piccadilly Station, Kate shouted out for a member of the station staff to bring a heart defibrillator, which was brought swiftly to the carriage.

Assisted by the three nurses and the former BTP Officer, Kate fitted the defibrillator before applying a single shock to the man. Immediately the man gained consciousness with a sharp intake of breath.

After composing himself, the gentleman stated he wished to return home. Luckily, paramedics shortly arrived to take the man to the Manchester Royal Infirmary for observation.

The following day PC Barlow went to visit the gentleman, who was identified as Michael Hall, 74, from Ashford-in-the-Water, Derbyshire.

Nursing staff later advised Kate that Michael would need extensive heart surgery and without her quick intervention Michael would have certainly died.

Commenting on what happened that day, PC Barlow said: “Having learnt first aid, in and out of a work capacity, I was thankfully able to recognise that Michael’s breathing had taken a turn for the worse.

“I’m very thankful and lucky that the people who came to help me were trained nurses and a former BTP Officer, who all remained calm and in control throughout.

“It was extremely fortunate that the incident hadn’t occurred a few minutes later, when the train would have had left the station and we wouldn’t have had access to the heart defibrillator which ultimately saved Michael’s life.

“It just goes to show the importance of having easy access to these defibrillators and it’s also reassuring that members of the public are willing to use them.”

On receiving her award, Kate said: “I’m very honoured to receive the commendation but I’m sure anyone in my situation would have done the same thing. I just happened to be the nearest person to Michael when he needed help.

“And once again, I’m very grateful to the members of the public who came to help me that day.”