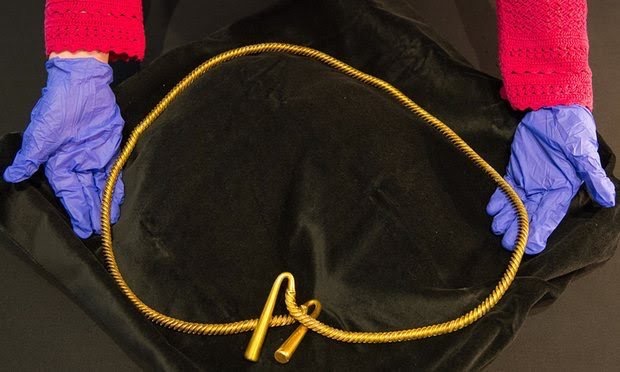 Matt Hancock, Minister of State for Digital and Culture, announced the finds at the launch of the Portable Antiquities Scheme (PAS) at British Museum

They included a Bronze Age gold torc (the largest ever found), a beautifully enamelled Anglo-Saxon mount and an intriguing hoard of silver coin clippings deposited in the late 17th century.

A further 1,008 Treasure finds have been reported this year in England, Wales and Northern Ireland, of which the most significant have been acquired by museums across the country; next year the British Museum with its local partners will be celebrating 20 years since the the Treasure Act came into force, and the establishment of the PAS.

The Bronze Age gold torc or armlet was found in Cambridgeshire and dates to circa 1300-1100 BC.

Gold torcs were fashionable jewellery in both Britain and Ireland during this period but this example, found in 2015, is one of the most important and spectacular ever found.

The weight of the gold torc (732gms) is exceptional and it is one of the largest ever found in Britain and Ireland. The torc is made of 86% (20 carat) gold, making it very soft.

However, detailed study by scientists at the British Museum found very little evidence of use on the solid gold terminals used to fasten the torc together.

This raises questions regarding its original use and meaning. Torcs are usually worn around the neck but the Cambridgeshire torc is probably too large to fit even the largest waist (extended it measures c.126cms).

It may have been designed to be worn over thick winter clothing or as a sash worn across the body, or may not of been intended to be worn by a human at all, it may instead have been worn by a prized animal (perhaps in the course of animal sacrifice). The absence of torcs in burials means that their function remains mysterious.