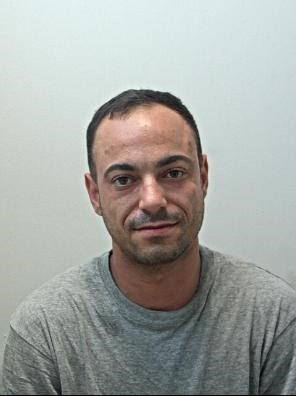 A Stockport man has been jailed after assaulting and running over several people in Blackpool before making off down the Promenade at 110mph.

Adam Clarke, 30, of Arnfield Road, Stockport was sentenced to six years and four months in prison.

He had previously pleaded guilty, on September 21st, to two counts of attempted section 18 assault, two counts of common assault and one count of dangerous driving.

The court heard that shortly after 4.30am on July 24th after Clarke and his partner – a 27-year-old woman – left a nightclub together in Blackpool.

A verbal altercation took place between the pair as they left the club and a short time later Clarke was seen on CCTV driving towards the woman in a hire car, before exiting the vehicle and assaulting her.

As he grabbed her hair, threw her to the floor and attempted to drag her into the car, another group of people saw what was happening and attempted to intervene. Clarke then punched a second woman, 28, to the face, causing her to momentarily lose her hearing.

As a group of men approached and began asking him to calm down, Clarke then became verbally abusive and a physical altercation broke out between them.

A short time later the women were walking towards North Pier with the men when Clarke reversed his vehicle and then drove at them at speed.

He made another attempt to pursue his partner, at which point police arrived.

Clarke then made off at 110mph down the 30mph Promenade but was located by officers a short time later on Starbeck Avenue.

He tested positive at the roadside for cocaine and cannabis and a search of the vehicle turned up two snap bags of cannabis, another bag of cannabis and several mobile phones.

As well as being jailed, Clarke was disqualified from driving for six years and nine months.

DC Simon Meekings, of Blackpool Police, said: “Clarke went on a drug-fuelled rampage, using his car as a weapon to attack several innocent people who were simply trying to enjoy a night out.

“Within a short space of time he carried out two serious assaults by deliberately hitting two women with a car, attempted to mow down a large group of innocent members of the public and committed two further assaults before driving off from police at 110mph in a 30mph zone.

“He could easily have left people seriously injured or even dead – not just those he deliberately targeted but anybody else in the area as he drove down the Promenade at terrifying speed while under the influence of drugs.

“His actions must have been incredibly scary for all those involved and I can only praise them for their bravery throughout the investigative process. I hope they are able to take some comfort from the sentence handed down today and that it gives them some closure.

“Clarke now faces a long time behind bars and I hope he will use it to reflect on the consequences of his actions.”