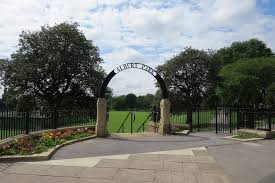 Two men have attempted to rape a 20 year old women in Albert Park on Grecian Street, Salford just after midnight on Sunday morning.

The woman had been in the park and two men had approached her asking for a light for their cigarette, the woman offered them a lighter and walked out of the park. The men then followed her and grabbed her dragging her back into the park before attacking her and attempting to rape her.

The woman managed to fight off the men and run to safety.

The men were black and dressed in dark clothing. One of the men was described as in his mid-thirties, over 5’9 tall, with short dark hair, dark eyes and a muscular build.

Superintendent Chris Allsop from GMP’s Salford borough said: “This was a terrifying attack on a young woman, thankfully she was able to get away from them, but she has been left extremely distressed.

“Our specially trained officers are offering her support thorough this.

“The men were predatory, and took advantage of the fact the woman was on her own in the park late at night.

“I am appealing for anyone who may have any information about this to get in touch as soon as possible.

“People will rightly be concerned about this but I can assure you that there will be an increased number of officers in the area, and anyone who has any concerns should talk to them.”

Anyone with any information is