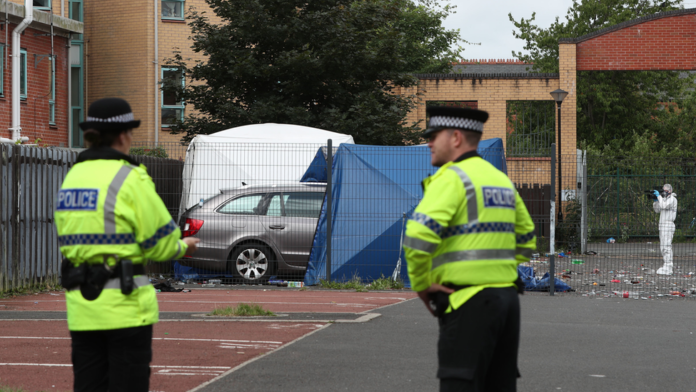 Greater Manchester Police and community leaders are urgently appealing for anyone with information to come forward after two men were shot dead in Moss Side on Saturday night.

Urgent enquiries are being undertaken by GMP’s Major Incident Team, working hard to establish the circumstances and trace the person responsible and anybody who may have aided or abetted him.

Prior the shooting there was a pre-planned community event in the Moss Side area, which was monitored closely by ourselves, as well as partner agencies including Manchester City Council. There was a policing operation in place around this event which safely and peacefully came to a conclusion at around 7pm. After it concluded some attendees event moved onto a further, spontaneous event. At this unplanned gathering, the incident occurred. GMP received no intelligence that there would be any firearm related criminality.

No arrests have yet been made and investigation work is continuing under GMP’s Major Incident Team.

Officers from GMP are working closely with community leaders in the Moss Side area, as well as Manchester City Council, as a way of reassuring local people and appealing for information following the incident in the early hours of Sunday.

Assistant Chief Constable Chris Sykes said: “Two men have been killed in the most brutal and horrifying way. This is our absolute top priority and our focus will remain on the investigation and finding those responsible for this barbaric act.

“We will continue to support the men’s loved ones and we have family liaison officers supporting them at what is an unimaginably difficult time. We will offer them as much help as we possibly can and continue to focus our efforts in seeking justice for them.

“We’ve also been working closely with the community who are quite understandably shocked and saddened by this news and know that this horror is not a reflection of the community and its values.

“We do know that there were a lot of people in and around the area at the time of the shootings. These people are all vitally important witnesses and we would make a direct appeal to anyone who may have information to please get in touch. We understand that people may have reservations about coming forward due to the current Coronavirus circumstances, but we would implore you to search your conscience and do the right thing. Two men have lost their lives and we must do everything that we can to get justice. You can do so by contacting us via phone, or alternatively could upload footage via our Major Incident Public Portal.

“We have been listening and understand that is a level of concern around the gathering and our response. The current Coronavirus legislation is hugely complex and presents a unique set of challenges for policing. We had an enormous amount of resource in place over the weekend and prevented a number of illegal gatherings from taking place. The events in Moss Side were a tragic example of what started as a small, peaceful community event, which was monitored by police and community partners, resulting in a separate, unplanned gathering later in the evening which police were not made aware of. This ended in the horrific events where two men were murdered.

“Right now our focus now is on supporting the families of those who sadly lost their lives at the event in Moss Side, and appealing to the community to come forward with further information which will help us to track down the perpetrator and get justice for the victims. Our priority is making arrests and bringing those responsible into custody. We will continue around the clock to trace those responsible and we are following a number of covert lines of enquiry. We hope the community support us in this and report anything information.”

Councillor Nigel Murphy, Deputy Leader at Manchester City Council, said: “This is tragic beyond belief and as a council we offer our support, thoughts and prayers to the families and communities facing such loss.

“We will look at how we help young people in particular who will have been traumatised by the incident – and this will include making mental health support available.

“We’d also stress that we know that this incident does not reflect the rich character and vibrancy of an area with such a strong sense of community. We’d ask people to come forward and help the police in any way they can with this investigation.”