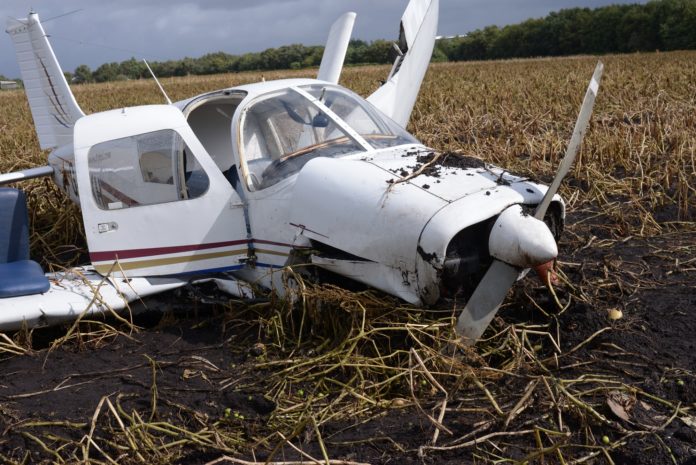 A pilot who overloaded a plane before it crashed with three passengers inside at Barton Airport has been sentenced for more than three years.

The pilot, 52 year old Robert Murgatroyd of Windy Harbour Road, Poulton-le-Fylde,had charged three men £500 each to take them to see a rare bird off the Island of Barra in his Piper PA28 aircraft.

But the men never reached their destination as the plane crashed shortly after take-off, injuring two of the passengers.

The incident sparked a joint investigation between GMP and the UK Civil Aviation Authority and enquiries revealed that the aircraft was 420lbs over its maximum weight.

Officers also uncovered that although Murgatroyd held a private pilot’s licence, he was not allowed to run commercial flights and this in turn rendered his insurance void.

The flight manual was also not specific to that particular aircraft.

On Wednesday 20 February 2019, following a three-week trial at Manchester Crown Court, Crown Square, a jury found him guilty of offences including recklessly endangering the safety of an aircraft, flying an aircraft without an air operator certificate, flying without an appropriate licence and flying without the aircraft flight manual.

Today, he was sentenced to three years and six months in prison and had his pilot’s licence revoked by the UK Civil Aviation Authority.

“Murgatroyd endangered the lives of dozens of people that day, including those  of motorists passing beneath his overloaded plane on the M62.

“That this crash only resulted in two relatively minor injuries is extremely fortunate.

“Make no mistake, this could quite easily have been a truly terrible disaster – all caused because one man saw an opportunity to make a quick buck.

“His passengers weren’t to know their pilot was flouting the law and that he had failed to take the appropriate safety measures.

“Aviation investigations are rare but we won’t hesitate to pursue convictions for those who break the law and risk the lives of others. Pilots hold a position of trust and those that deliberately breach this trust can expect little sympathy from the authorities.

“I hope this investigation and today’s sentence sends out a clear message to those that use general aviation as a means to commit crime.

“I’d once again like to thank witnesses who came forward to help with evidence I would also highlight the work of PC Suzanne Keenan, Simon Pollock and Anthony McKeown from the CAA’s Investigation Enforcement Team, as well as prosecuting barrister Henry Blackshaw – without them today’s sentence would not have been possible.”

Three arrested as armed officers descent on street in Ashton Under Lyne and recover...

Man in his 20’s stabbed to death in Beswick