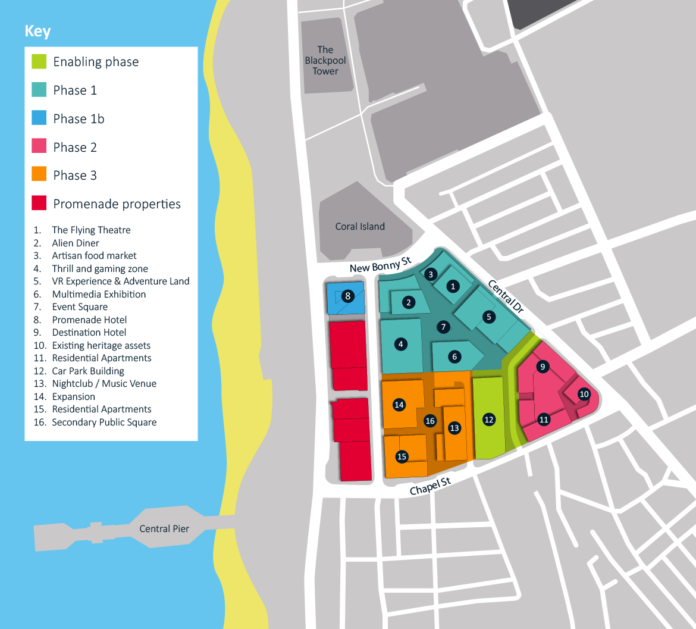 Plans for the biggest single investment in Blackpool for more than a century are unveiled today.
The £300 million Blackpool Central development will bring world-class visitor attractions to a landmark site on the famous Golden Mile. A range of indoor attractions will be built, including the UK’s first flying theatre, the world’s first multimedia exhibition of its kind and the most advanced virtual reality experience on an epic scale.

Work on the current Central Station site in the heart of the town, just a short walk from the famous Golden Mile could start as early as 2020.

It is estimated that the development will attract 600,000 additional visitors a year with a combined annual spend of £75m. It will also create 1,000 new jobs for people in Blackpool.

The proposed themed of the site is ‘Chariots of the Gods’ (COTG) – a series of novels written by Eric Von Däniken in the 1960s and 1970s, based upon unsolved mysteries of the past, such as the pyramids of Egypt and Mexico, ancient cave drawings, the monuments of Easter Island and alien visitors!

The project is a collaboration between Nikal Ltd, and Media Invest Entertainment, which owns the intellectual property rights of Chariots Of The Gods.

Blackpool Council is working closely with both parties to help ‘unlock’ this development opportunity which is envisaged to be delivered over several phases over an 8-9 year period.

You know it’s the World Cup when…….