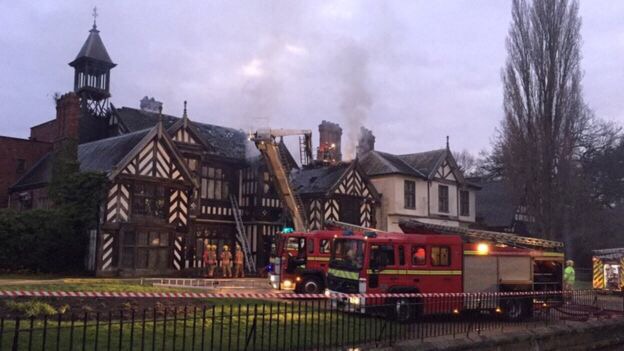 A planning application has been submitted to rebuild the clock tower and for repair works to the roof and the exterior walls of the medieval Manchester building, which was badly damaged in an arson attack in March.
Around 50 firefighters attended the scene at the 16th-Century Wythenshawe Hall, to put out the blaze which took hold across the timber-framed building.Police suspect it was targeted by arson.
Since the fire, an emergency tarpaulin has been used to protect the property while essential structural and archaeological works were completed inside.
Last month the Hall was placed on Historic England’s At Risk register.Historic England have been working with Manchester City Council since March to conserve what remains but the damage is severe.

The philosophy of the repair project is to retain and repair as much material as possible.For example, fire damaged timbers that remain sufficiently strong will remain. Those that aren’t will be salvaged as much as possible with new timber spliced in or bolted adjacent to the original material.

The planning application is expected to be referred to the Secretary of State who will be asked to endorse Historic England’s recommendations.If planning consent is approved, and once a suitable contractor is appointed, work on the Hall is expected to start in spring 2017.

Cllr Sue Murphy, deputy leader of Manchester City Council, said: “So much work has gone on inside the Hall to protect it and salvage anything of architectural value, but it’s so heartening to reach a point where the repairs to the exterior of the building can begin.

“This is an important milestone for the local community who rallied to support the effort to save the property and the visible signs of the repair work will be a comfort to those who thought the fire could be the end for Wythenshawe Hall.”

Urban Splash given go ahead for Irwell Development