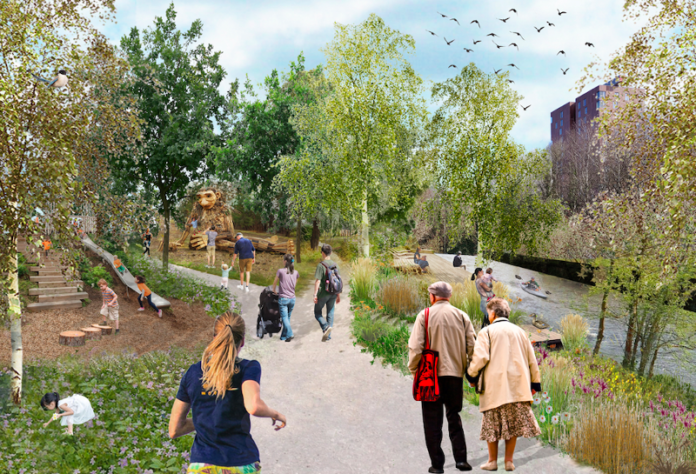 A new planning application has been submitted by Manchester Council that will begin the process of making the Red Bank neighbourhood ready for development, bringing brownfield land back into use.

This initial phase of works has been made possible through a £51.6m funding award from the government’s Housing Infrastructure Fund (HIF), which will address a series of infrastructure constraints and allow the delivery of new homes and green spaces, including the first phase of a new City River Park within the Red Bank neighbourhood – part of the wider Victoria North programme of development.

The planning application seeks approval for enabling works including invasive tree and vegetation removal, creation of a temporary haul road and demolition of the Creamline Dairies buildings, in association with the future delivery of the new Red Bank neighbourhood. The application includes a commitment to increase biodiversity by at least 10% as a result of the overall development.

Red Bank will see the delivery of up to 5,500 new homes across a range of types and tenures, including affordable homes, as well as supporting social and community infrastructure. This includes key improvements to walking, cycling and public transport routes, creating an accessible and highly sustainable community, close to the city centre.

Red Bank is one of seven neighbourhoods that make up the Victoria North regeneration area – one of the biggest renewal projects the city has ever undertaken.

Red Bank is currently characterised by underused brownfield land – with the largest brownfield site being the 25-acre former Red Bank carriage sidings – which closed for rail use in the late 1980s, and which has often been blighted by fly-tipping and anti-social behaviour.

The site is currently inaccessible due to a mass of low quality self-seeded, invasive species of trees and vegetation. Preparing the site for development will kick-start a wider programme of investment, which will introduce more appropriate and valuable trees and plants as part of the long-term commitment to developing an attractive, green neighbourhood.

Further planning applications will be submitted on a phased basis during 2022 seeking permission for the main infrastructure works, improvements to St Catherine’s Wood and the first elements of the City River Park. These will be followed by applications for residential development. Initial public consultation exercises relating to the redevelopment commenced in October 2021 and further consultation events will be undertaken in December 2021 and continue as proposals for the wider neighbourhood are further developed.

Over the next 15 to 20 years, the Victoria North project will deliver more than 15,000 new homes (at least 20% of which will be affordable housing), with each neighbourhood connected by high quality green spaces and 46-hectare City River Park, which will open up and celebrate the Irk River Valley for the first time in decades.

Cllr Gavin White, Manchester City Council’s executive member for housing and employment, said:
“This is a landmark planning application for Victoria North and will help to unlock the untapped potential of the Red Bank neighbourhood. For some decades this part of the city has lain dormant, almost cut off from the rest of Manchester.

“The Housing Infrastructure Funding will open access to the future Red Bank area, which will facilitate 5,500 new homes – including significant affordable housing – and begin the exciting works to bring forward the new City River Park, and the beginning of the wider investment that will deliver 46-hectares of new high-quality green space in the coming years.

“The former Red Bank Carriage Sidings provides 25 acres of brownfield land on the edge of the city centre which can be repurposed for residential uses, meaning that we can continue to provide much needed housing without using greenbelt land.”

Plans for £741m Trinity Development given the go ahead