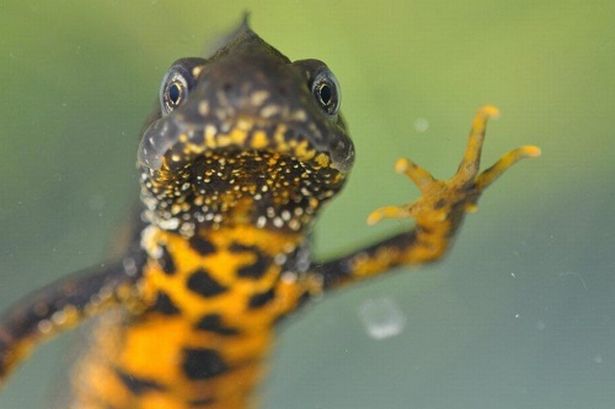 A pioneering project aimed at protecting one of the UK’s three native newt species is being embarked on by Wigan Council.

The council is joining forces with Natural England, Greater Manchester Ecology Unit and the Lancashire Wildlife Trust to conserve Great Crested Newts which have seen huge declines in their populations since the 1960’s despite being heavily protected by law.

The scheme is centred around restoring the natural habitat of the orange bellied amphibians with sites like Amberswood, Cutacre Country Park, Bickershaw Country Park and Fairhurst Lane all identified by Natural England as areas that could provide a sanctuary for the species.

Pond creation works at Amberswood and Bickershaw Country Park has already been completed and are already being inhabited by plant and dragonfly species.

Officers have reported seeing a pair of broad-bodied chasers mating and the female laying eggs into one of the new ponds just two months after the ponds were completed.

This project is part of District Level Licensing – a new scheme whereby developers make a conservation payment which is used to create or restore new ponds in locations that will benefit the species.

Leader of the Council, Coun David Molyneux said: “This innovative scheme could provide the development  industry with an alternative approach that can both enhance ecological habitat and species protection, whilst enabling developers to meet the needs of the Borough for homes and employment space.”