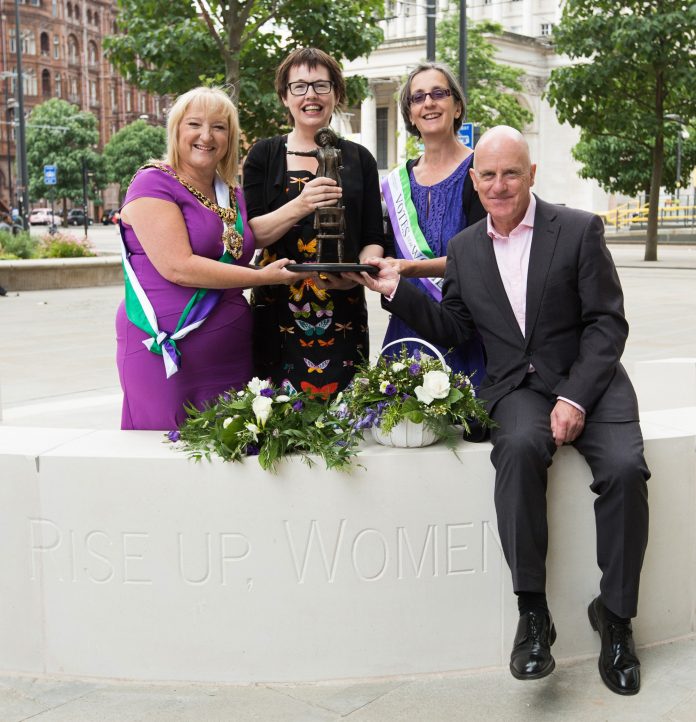 The Emmeline Pankhurst Statue Campaign reached a landmark moment on Sunday 15th July, the 160th birthday of Emmeline Pankhurst, with the unveiling in Manchester’s St Peter’s Square of the stone meeting circle in which her statue will stand.

The ceremony was led by Councillor Andrew Simcock, who has spearheaded the campaign behind the statue. In a celebratory occasion he was joined by sculptor Hazel Reeves, Helen Pankhurst, Emmeline Pankhurst’s great granddaughter, and the Lord Mayor of Manchester, Councillor June Hitchens. Singer Rosie Garland thrilled those who gathered with a rendition of March of the Women followed by Happy Birthday, with flowers laid for Emmeline in suffragette colours.

The white Portland stone wall that forms the meeting circle is carved with the words of the suffragette campaign, ‘Deeds Not Words’, and Emmeline’s infamous rallying cry, ‘Rise Up, Women’.

Dr Helen Pankhurst, says, “Symbolically the Emmeline sculpture starts with the meeting circle, which reminds us of how people came together to fight for our rights. It’s wonderful that 100 years later Emmeline will again be bringing people together in her home city of Manchester.”

The ceremony was the first formal milestone for the project, with the statue to be unveiled on 14 December, marking 100 years since some women first voted in a UK General Election. Hazel is currently in the final stages of sculpting her work of Emmeline, which will see her stood on a chair as if addressing a crowd and symbolically facing towards the former Free Trade Hall, a scene of key suffragette moments.

Councillor Andrew Simcock, Chair of the Emmeline Pankhurst Statue Project, comments, “The unveiling of the meeting circle is the next step in Manchester’s suffragette story, as the city thanks one of those that have helped to shape it’s history as well as that of the nation. We felt it was very important and fitting to carry this out on Emmeline birthday, in doing so remembering the person as well as her legacy.”

The ceremony was also used to thank those that have supported the campaign alongside the Government’s Centenary Cities fund. This includes Corporate Sponsors, Property Alliance Group and Manchester Airport, and individual Gold Sponsors Edwina Wolstencroft, Dennis Morgan, Mr and Mrs Gosztony, Laura and Peter Carstensen and Andrew Simcock himself, who all purchased a limited edition of Hazel Reeves’ maquette design.

The statue will be the first of a woman in Manchester since Queen Victoria was unveiled in Piccadilly Gardens in 1901. Emmeline Pankhurst was selected as the public’s chosen female icon to be immortalised as a statue from a long list of 20 inspiring Mancunian females.

She will take her place alongside the city’s 18 male statues and the statue of Queen Victoria. This will be the culmination of a campaign launched in 2014 to celebrate the significant contribution of women to the city. 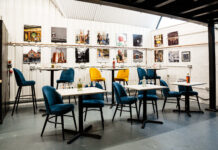 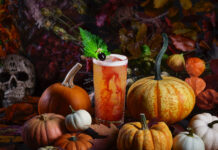 Terrifying Tipples from Cazcabel Tequila at The Ivy