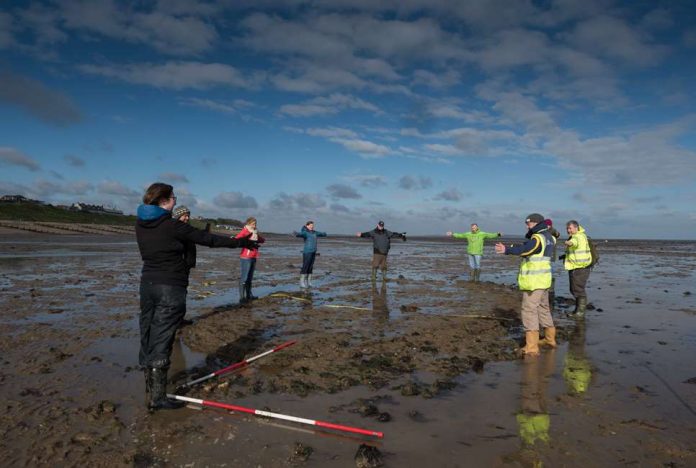 The wreck of a Tudor ship has been given protected status after being found under a Kent beach.The wreck is exposed in mudflats when the tide is low.

Historic England commissioned Wessex Archaeology, assisted by volunteers from Timescapes to survey the exposed remains which measure 12.14m long x 5m wide. Two trenches that were excavated revealed the presence of well-preserved hull timbers from the keel up to the turn of the bilge, where the bottom of the ship curves to meet the vertical sides.

Dendrochronological sampling has revealed that one oak plank is of southern British woodland origin with a felling date of AD1531. Three other oak samples were tentatively dated to the 16th century, with elm, larch and beech timbers. The construction of the hull suggests that the ship is a late 16th century, early 17th century carvel-built single-masted merchant ship of 100-200 tons.

The proximity of the wreck to a well-known copperas works provides some context for the wreck. Copperas, also known as green vitriol – hydrated ferrous sulphate, was largely used in the textile industry as a dye fixative and in the manufacture of ink.

Copperas works are known at Whitstable from 1565 and it is possible that the Tankerton Beach wreck was engaged in transporting copperas before being abandoned at the coast edge in an area of what was once tidal salt marsh.

Images That Show How Technology Has Changed Since The Millennium

Carpet cleaning tips you shouldn’t waste your money on

6 Qualities To Look For In A Great House Mover