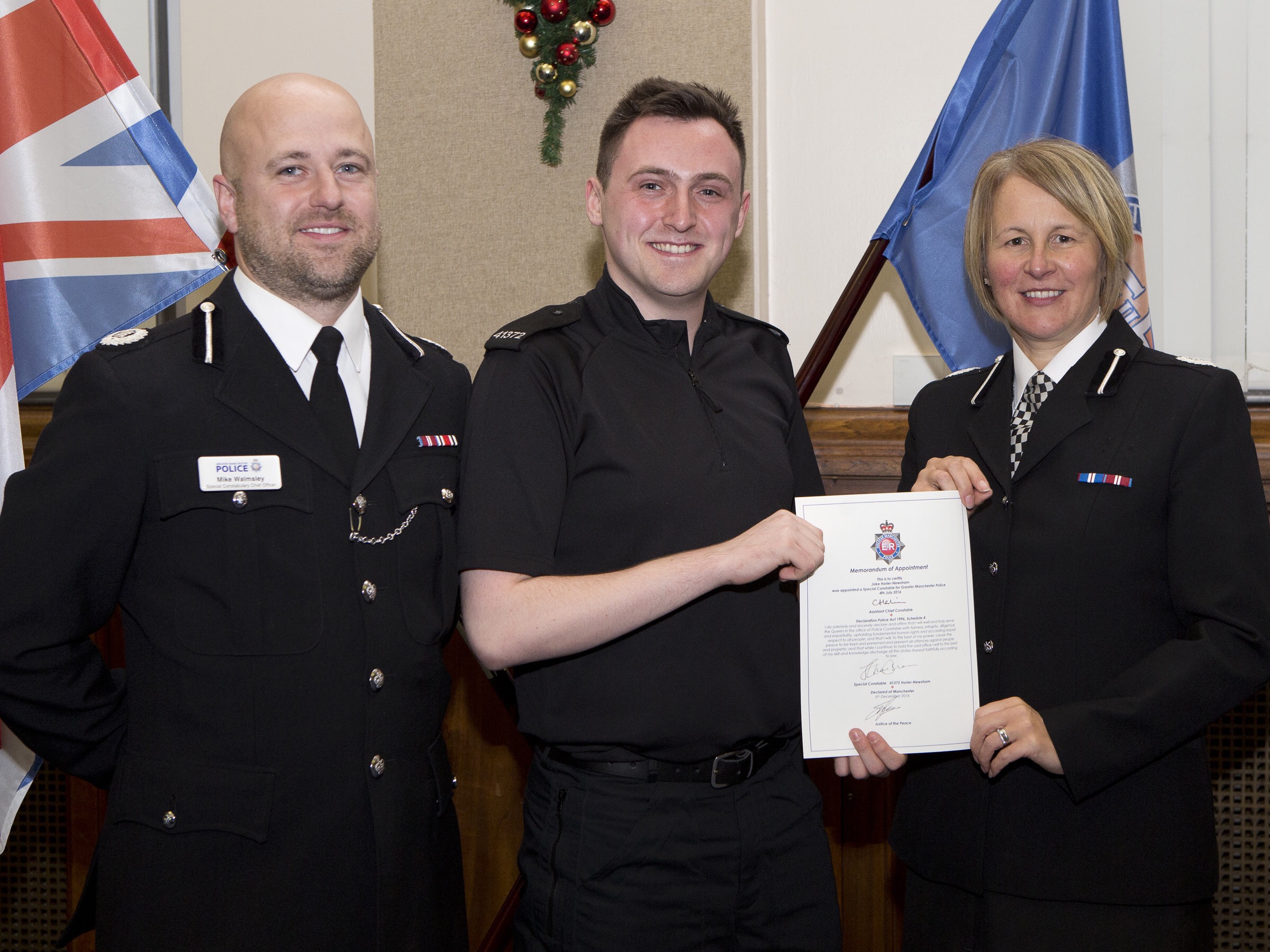 A full-time music student, studying opera singing, was one of 15 new Specials to join GMP at a ceremony held on the 6th December at Sedgley Park.

Jake Horler-Newsham, 22, from Burnley, is currently in his fourth and final year at The Royal Northern College of Music, where he is studying for a BA in Music, specialising in opera singing.

As a child, Jake grudgingly took violin classes which involved basic vocal lessons, this is when Jake discovered his love and talent for singing. After deciding to move from violin to singing classes, at 16 years old Jake successfully auditioned for a junior place at The Royal Northern College of Music, before obtaining a senior place at the same institution in 2013.

Jake shares his time studying with volunteering as a Special Constable, where he has recently been assigned to the City of Manchester division.

On why he decided to join GMP as a Special, Jake said: “I wanted to witness my local community from a different perspective, plus having the chance to be able to help those people around me seemed like an ideal opportunity.

“Obviously singing plays an important part in my life, but usually for opera singers the voice doesn’t fully mature until around 28 to 30 years old, so I have plenty of time to consider my future options and potential career paths.”

On his experiences as a Special so far, Jake said: “I have to admit it is quite unique not being a member of the public and it was fairly strange the first time I was called ‘Officer’.

“I’m grateful for the training we all received and I feel best prepared for any challenges that may lie ahead. I also like the fact that we covered so much during our training phase, I thoroughly enjoyed learning about law.Being a Special is great way to test the waters and see of what a potential full-time career in the police would be like, I’d highly recommended it”.

At the attestation ceremony, family and friends proudly watched on as the Specials took their binding oath to uphold the office of Constable with fairness, integrity, diligence and impartiality.

The evening’s proceedings were led by Assistant Chief Constable (ACC) Catherine Hankinson, with Justice of the Peace Stephen Paine and Deputy Police and Crime Commissioner Jim Battle also in attendance.

All of the Specials are volunteers and will give at least four hours out of their own time every week to help with policing duties. They will be involved in various operations at a time of year when the majority of us are preparing to wind down and enjoy the festive period.

ACC Catherine Hankinson said: “Special Constables like Jake are integral to modern policing. Not only do all Specials share the same powers as regular officers, including the power of arrest, but they also help to reassure the public by having a visible policing presence in their local community.

“Many Specials also work, or as in Jake’s case study full-time, alongside volunteering at least four hours a week of their own time to policing duties.

The Women of Weatherfield celebrated in new documentary

Long-Bailey-“I never intended to cause hurt to anyone”