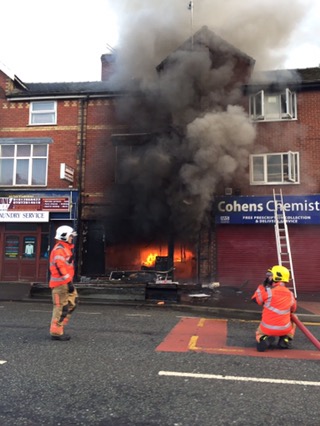 One man is being treated for burns at North Manchester Hospital after an explosion at the Emerald Cafe on Rochdale Road in Harpurhey on Saturday afternoon which is believed was started with a chip pan fire.

The fire started in the kitchen with a chip pan and quickly grew out of hand and spread through the business. It is not known at the moment what caused the subsequent explosion which blew out the front windows and devastated the rest of the café but investigations will be carried out by Fire Investigation Officers over the coming days.

Group Manager Phil Nelson who was at the incident said: “The man who we believe to be the café owner, initially tried to extinguish the chip pan fire himself using a fire blanket, but as it grew out of control he ran onto the street. The man has suffered burns but has been very very lucky.