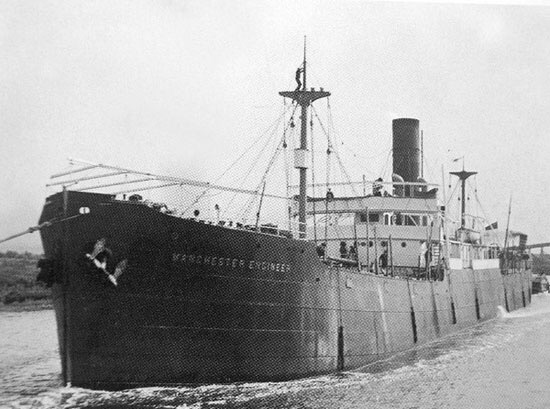 There were reports of a naval skirmish in the North Sea that week.The Admiralty reported that four British destroyers sighted three German ships off the Belgian coast, the latter running back to port with the British ships in pursuit.Shots added the report were exchanged with two enemy vessels hit.
The crew of the torpedoed liner The Manchester Engineer landed at Queenstown in Ireland.It was the second Manchester based ship to be lost in the war.All the crew had been saved, said the early reports with the German U boat fleeing when other ships came to its assistance off the coast of Waterford.
Two ships were reported attacked in the English Channel by German U boats.The cross Channel steamer the Sussex managed to get back to port although there were reports of loss of life when she was fired on without warning. However the steamer, the Englishman was sunk with reports of sixty nine survivors being picked up.

The price of bread was once again a concern in Manchester.The possibilities of making cheaper by increasing the weight of the loaf was discussed by the Manchester, Salford and District Bakers Association who were worried at the hardships being faced by poor families in the region.
Manchester City Coroner heard the case of death of four year old Florence Gregson of Red Bank who was killed when a brick fell from the chimney into the kitchen where he knocked over a kettle of hot water.The child’s leg was badly scalded and she died of septic meningitis two days later.The court heard that the child’s mother had previously complained about the state of the chimney, but the coroner ruled that there was no question of negligence and a verdict of accidental death was recorded.

Another case at the coroners court that week heard how one women was killed and another three injured when a stack of cotton bales collapsed at a mill in Collyhurst.Twenty seven year old Mary Riley, whose husband was fighting in Salonica was helping to unload the bales from a lorry when the stack collapsed.A verdict of accidental death was recorded.

There were severe delays on the railways between Manchester and London with blizzards holding up two express trains and seeing the arrival of the mail train from the capital nine hours late.Manchester escaped the worst of the snow which hit the south of England.It would take a few days before services were back to normal.
At the Theatre Royal that week, the Yeoman of the Guard was playing while Charles Hawtry comedy the Private Secretary was filling the aisles at the Princes Theatre.