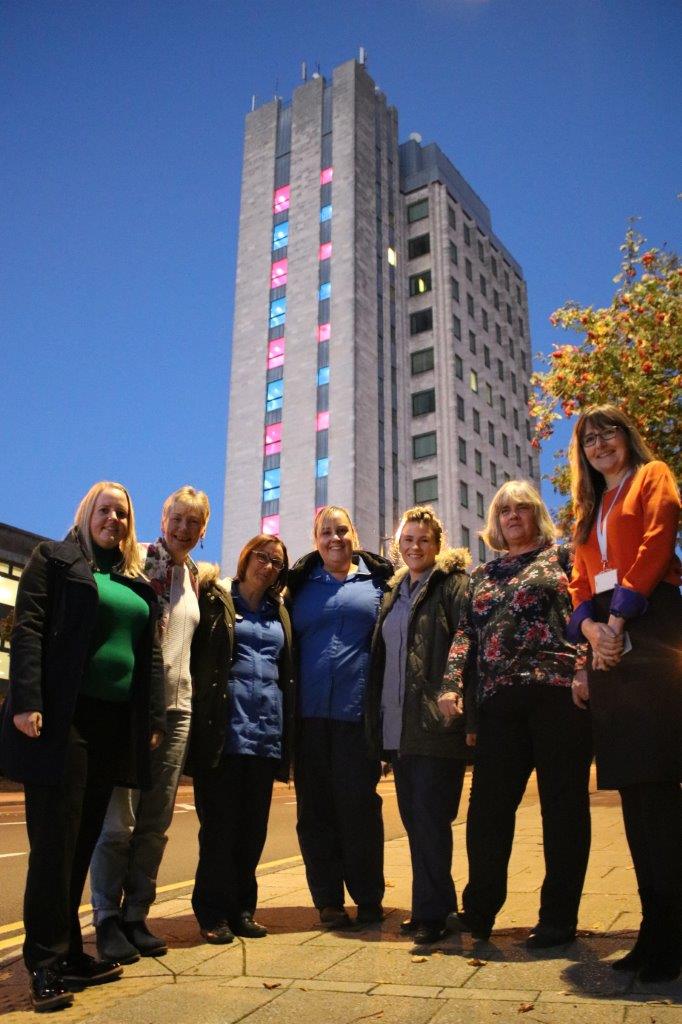 Oldham Civic Centre and Royal Oldham Hospital will be illuminated pink and blue to show support for Baby Loss Awareness Week (9-15 October) and memorial events taking place at the hospital.

Sixty charities across the UK have formed the national week to raise awareness about the key issues affecting those who have experienced pregnancy loss or baby death in the UK.

Families who have lost a baby through stillbirth or after birth are being invited to a special Baby Memorial Service at The Royal Oldham Hospital. The service will be held in the Education Centre at the hospital on Thursday 11 October at 7pm and the hospital’s Spiritual Care Team welcome all who wish to attend.

Hospital staff have been working hard to set up a memorial garden on site for bereaved families to place a pot of flowers or plant in memory of their loved one. Dexter’s Garden will be officially launched on Monday 15 October from 12noon to 2pm on Westhulme Street, near to the Diabetes Centre at the B&Q end of the hospital site.

Dexter’s Garden is the brainchild of Katie Bowker, a midwife in the Maternity Department at the Royal Oldham Hospital. The project is a personal one, which is very close to Katie’s heart, and a tribute to her son Dexter, who passed away shortly after birth in November 2016.

Katie said: “The idea behind Dexter’s Garden is to provide a special place for families who have lost a baby at any stage of pregnancy and after birth. I want to provide a safe, quiet place for families where they can reflect, mourn and pay tribute to their angel babies – a place that is calm, serene and beautiful. I hope that families will help treasure Dexter’s Garden by leaving their own memorial planter.”

This daytime event (on Monday 15 October) will also be followed by a special evening event organised by the SANDS charity from 6.30-7.30pm. This event will create a ‘Wave of Light’ and families are invited to bring along a candle to hold during the ceremony. At the same time, thousands across the country will light a candle in solidarity.

The Rochdale Road-end of the Civic Centre tower in Oldham town centre and Royal Oldham Hospital’s signage at the front of the site will be lit up in the colours throughout the week.

Councillor Amanda Chadderton, Cabinet Member for Children Services, said: “Oldham Council hopes by lighting the Rochdale Road-end of the Civic Centre it will show a message of support to the sixty charities and our friends at Royal Oldham Hospital, as well as giving local bereaved parents and families an opportunity to talk about their precious loved ones.

“Baby loss is very close to many of our hearts affecting thousands of people every year. We know it is devastating for parents and families and it’s vital that we highlight that there’s bereavement support and care out there and those that need it can access it for as long as they need it.”

Anyone who would like further details on the memorial service should contact the chaplaincy and spiritual care team at The Royal Oldham Hospital on 0161 627 8796.