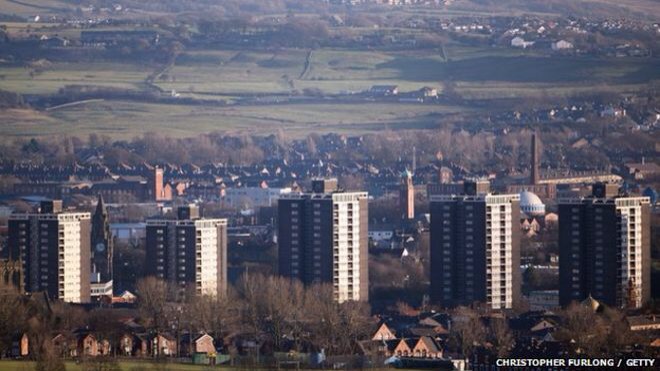 Parts of Greater Manchester including Rochdale and Oldham have been named in a list of the top ten of the least prosperous places to live in the UK.

The Legatum Institute, an international think tank based in London, published its first ever ‘Geography of Prosperity’ Index, comparing the prosperity of 170 areas across Britain.

They joins Wolverhampton, Blackpool,Sandwell,Liverpool and East Derbyshire in a list that puts Hammersmith & Fulham and Kensington & Chelsea, Westminster, Wandsworth, Camden and the City of London and The Outer Hebrides as the best places to live.

People living in the Outer Hebrides are the happiest in the UK says the survey with The Outer Hebrides, Orkneys, Shetlands, and Aberdeen & Aberdeenshire all ranking in the top ten, helping Scotland beat England’s level of average prosperity.

However, both are beaten by Northern Ireland, where high life-satisfaction scores see them enjoy their highest levels of prosperity in the UK.

Incomes in the Outer Hebrides are just £15,000 a year (135th out of 170). The islands’ residents from Lewis to Barra are however the happiest in the UK, followed by Orkney Islanders, who rank 2nd.

The Index reveals a number of other interesting findings:

People in Hammersmith & Fulham and Kensington & Chelsea have an average income of £133,000 a year.

However, 4 of the 10 most miserable areas in the country are in London: Haringey and Islington, Croydon, Camden & the City of London and Brent.
Wales contains 3 out of 10 of the least wealthy parts of the UK. People living in Anglesey have the lowest incomes in the country—£11,200 a year—below the annual national minimum wage, while the Gwent Valleys (£12,300) and South West Wales (£13,300) are also near the bottom when it comes to income. Wales is also the most miserable of the four nations of the United Kingdom.

People living in the NE region of Greater Manchester, says the report have an average income of £13,969.

In fact much of the region fared badly in the statistics which accompany the report.

Only the region identified as South West at 78th appears in the top half of the list.

“The “Geography of Prosperity” index reveals that prosperity is about more than just wealth—it is about feeling that one’s life is worthwhile. The data shows that Scotland secures four top spots, predominantly due to very high levels of life-satisfaction. Residents of the Outer Hebrides have the highest levels of satisfaction with their lives in the whole country.”

“Yet, areas like Aberdeen and Aberdeenshire rank highly because the oil industry boosts average earnings considerably, but so too because the area has reasonably high life-satisfaction. The index shows that while robust economic success can make an area prosperous, this in itself is not enough. Some of the most prosperous areas of the country are those where, regardless of their income, people have the opportunity to lead healthy, fulfilling and prosperous lives.”

Four charged with conspiracy to murder