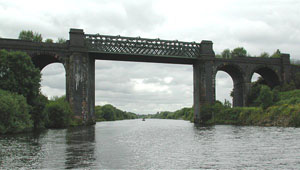 This week sees the fifty first anniversary of the disaster that occured on the Manchester Ship canal near Partington which saw six men die following an explosion which sent a wall of fire along the canal.

Two boats were  engulfed in flames that rapidly ripped across the canal, one of them used as a ferry as a section of the canal over a mile long was razed by a fire which reports said burnt from bank to bank reaching sixty feet high.

One of those killed was the ferryman, 24 year old Bernard Carroll in charge of Bob’s Ferry which had been used for more than a hundred years, to transport workers on a five minute journey across the canal.

His case was particually tragic as he had smelt a strange substance on the canal before the explosion and had refused to row the ferry across while he rang the police.

Several passengers, waiting on the jetty, were worried that they would be late for work and decided to row themselves over the canal. On his return Bernard could see the boat in the middle of the canal with the passengers obviously affected by the 4-foot high mist on the water.

Bernard rowed out to help them and was instantly killed in the fire which followed the explosion.

The authorities were baffled at first by the explosion with many theories put forward.The accident occured along a section of the canal bordered by several large industrial plants between Partington and Cadishead and there were also a large number of pipelines in the area.

There was an inquiry and it was ascertained that an oil carrying ship the Dutch registeed Tacoma had spilled fuel into the canal.It regularlly shuttled between Shell’s plants along the banks.

It was revealed that the men who were supposed to be looking after the pumpiong operation had left their posts and the spillage, that under normal circumstances, would have been cleaned up, floated down the canal and formed a vapour which eventually ingnited.It is thought that the vapour had also made the men on the ferry appear drunk.

Stephen Hunter, Sole survivor of the disaster remembered the tragedy.

I was 17 at the time of the disaster four weeks from my 18th birthday, which I spent in Withington Hospital burns unit. I don’t remember much about the disaster, I try to put it to the back of my mind

The mystery of the Birchfield Park Puffer Fish