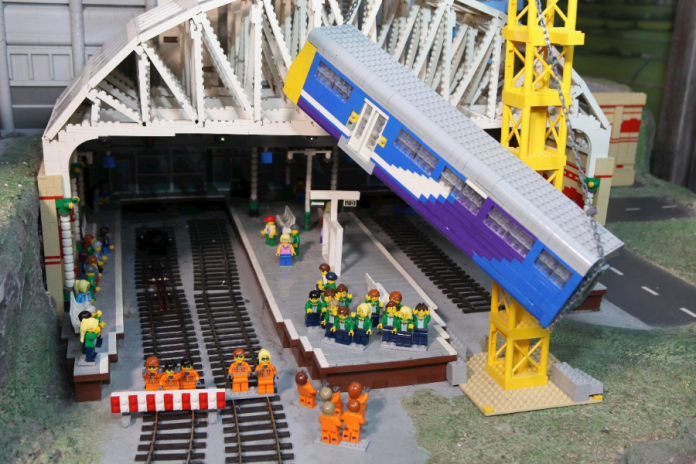 Legoland Discovery Centre bosses have stripped out the Northern Rail train at the centre of ‘Mini Land’ and removed the railway podium from the miniature Lego-built city of Manchester.

This is in acknowledgement of the millions of commuters affected by the current Northern Rail debacle, and the knock-on effect also hitting Northern businesses hard, especially those that depend on customers commuting to Manchester.

Nearly three in ten (29%) of the attraction’s customer base, live in the most affected areas of Stockport, Warrington, Liverpool, Stoke-on-Trent, Bolton and Wigan with footfall decreasing by half from some of those areas in the last 8 weeks.

The decision to remove the blue and purple brick-built train carriages from Mini Land, was made on over-hearing visitors’ comments about the Northern Rail train on the Lego-built railway tracks that forms part of the Mini Land feature.

“As a Northern business, we depend on visitors from neighbouring areas, and I know we’re not alone. Northern Rail’s ongoing problems are such that it’s impacting on business.”

“The suggestion from staff that the Northern train should be removed from the attraction, we feel, reflects events from the region. Mini Land is a dedication, in Lego form, of what’s great about Manchester, and the North West, today.”

Mini Land, the Lego-built miniature city of Manchester contains over 15,583 bricks, each laid by hand and glued into place by Alex Bidolak Master Model Builder and included within the general admissions price.

For further news on the attractions or to book your tickets please visit:

A quarter of a million people across Greater Manchester are not paid the living...