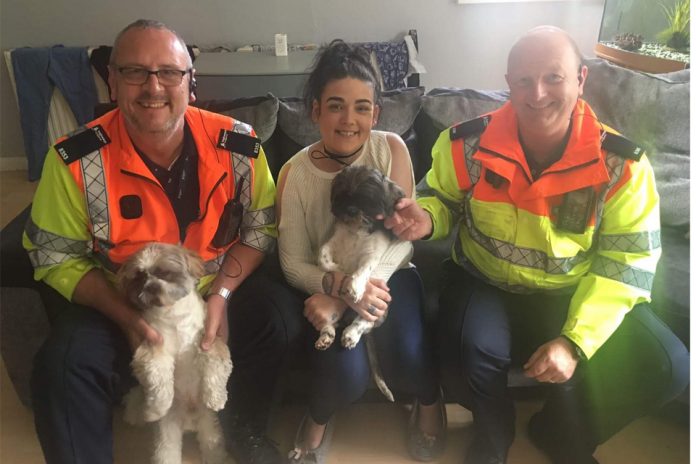 A dog lover from Eccles has praised two Highways England traffic officers for reuniting her with her missing companion Bailey.

Donna Gilmore, 31, of New Lane who suffers from cystic fibrosis, was understandably distraught when Bailey, her 2-year-old Shi Tzu, disappeared from the house, not far from the M60, earlier this month.

A few days later, after a search of the area and a social media campaign from Donna’s friends and family had failed to bring Bailey home, a dog was spotted near junction 12 of the motorway by Highways England traffic officers Mark Wellman and Dave Lavelle.

Mark and Dave, who both work at the Rob Lane outstation at Newton-le-Willows, spotted the dog on the wrong side of the safety barriers on a bridge overlooking the eastbound M62, on the approach to the M60. Traffic was temporarily stopped for everyone’s safety and so Bailey could be retrieved. He was taken away to be checked by a vet – while the search for its owner began.

Dave, 58, from Davyhulme in Trafford, said:

We had heard reports of a dog in the area over a few days so we were keeping a look out for safety reasons as much as anything as stray animals can cause drivers to swerve and brake suddenly, leading to collisions. “At the time we spotted him, we had no idea it was Bailey but we posted a picture on Twitter hoping someone would recognise him and – to cut quite a long story short – a police officer I know and whose daughter is a friend of Donna’s made the connection.

There was an added bonus – Bailey’s return also reunited him with his 10-month-old son Fudge.

Detective Sergeant Hayden Roberts, the dad of Donna’s friend Cerian, has now written to Highways England on behalf of Donna to thank Mark and Dave for their efforts.

The Twitter picture got back to me via Cerian who hoped I could find out where Bailey had been taken to. I happened to know Dave from a previous job so as a longshot I contacted him – but I had no idea he had actually been involved in Bailey’s rescue!

Dave called me back a short time later with the details that Bailey had been taken to the RSPCA in Salford I was able to call my daughter and an overjoyed Donna to give them the good news.

Donna and my daughter asked me to write thank Dave and Mark for the outstanding and caring service they have provided. This is definitely a story with a very happy ending!

Greater Manchester to get 347 new Police recruits as Government announces first tranche of...