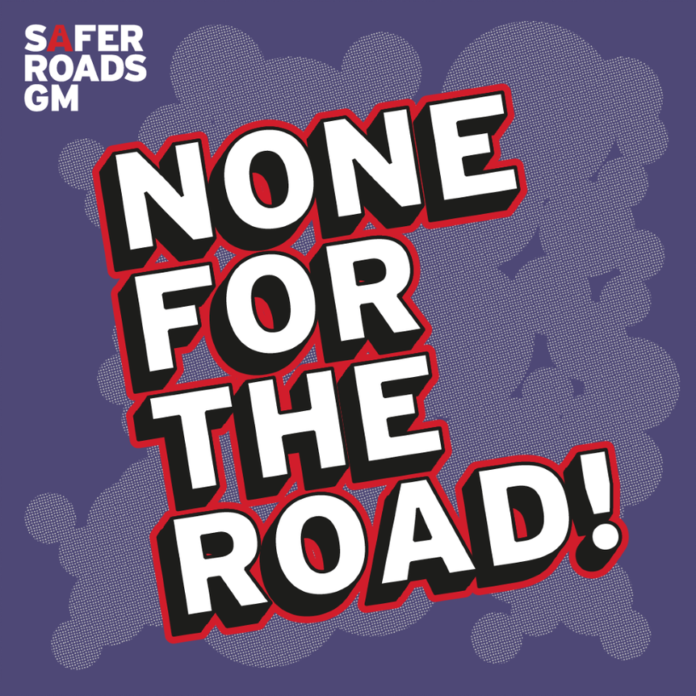 The potentially fatal consequences of getting behind the wheel after drinking or taking drugs is the focus of a new awareness campaign this Christmas.

Drivers are being urged to make it None for the Road as when they are under the influence, they are more likely to kill or seriously hurt themselves or others.

Thousands of families in Greater Manchester are already enjoying the festive period, but last year 13 people didn’t make it home for Christmas as a result of drink and drug driving collisions.

Drink and drug driving increases over the Christmas period as people head out to socialise and attend gatherings, with December seeing the third highest number of ‘driver impaired’ collisions.

Between 2016 and 2020 there were 248 incidents involving drink or drug driving on roads across the city-region. In total 307 people were killed or seriously injured as a result.

And people are being encouraged to plan how they and others are going to get to and from a Christmas party or night out, and should consider using public transport, taxis, or private hire vehicles.

Peter Boulton, TfGM’s Head of Highways, said: “If you get behind the wheel after drinking or taking drugs you are taking your own life, and the lives of other people, in your hands.

“Not only are there strict penalties if you are convicted of drink or drug driving, but the potential consequences can be catastrophic.

“Last Christmas thirteen loved ones were missing around the dinner table because of drink or drug driving. If those involved had instead had none for the road, that number would be zero.

“So, if you’re going out throughout the festive period, don’t get behind the wheel under the influence and have a night to remember instead of one to forget.”

GMP officers will be carrying out roadside checks across Greater Manchester using breathalysers and drug wipes to crack down on the number of drivers impaired through drink or drugs.

In England, the legal alcohol limit for drivers is:

If you are caught driving or attempting to drive while above the legal alcohol limit, you face a driving ban, face six months’ imprisonment, and an unlimited fine.

Causing death by careless driving when under the influence of drink may result in up to 14 years’ imprisonment, as well as an unlimited fine, a driving ban and an extended driving test before your licence is returned.

GMP Chief Inspector Danny Byrne said: “Those who chose to drink or drug drive, are putting the safety of themselves, any passengers in their vehicle and other road users at risk, with often fatal consequences.

“We want the people of Greater Manchester to enjoy themselves this festive season, but we want everyone to be doing so safely. We will have extra officers deployed across the force, carrying out roadside breath tests and drug wipes to ensure that those driving over the alcohol limit or driving whilst under the influence of drugs are caught and prosecuted.

“Driving while under the influence or getting a lift with someone who’s over the limit can often seem like the easiest way to get home, but before you do, take second to think about how you would feel if someone you cared about what seriously injured in a collision caused by a drink or drug driver.

“Plan ahead – take public transport, book a taxi or take it in turns to be a designated driver. Whether you are the driver or a passenger, you have a responsibility to help keep yourself and others safe.

“If you suspect someone is driving while under the influence of drink or drugs, you can report it to us by calling 101 or alternatively details can be passed on anonymously via the independent charity Crimestoppers on 0800 555 111.”

Bury town centre – a masterplan for the next 20 years is approved by...