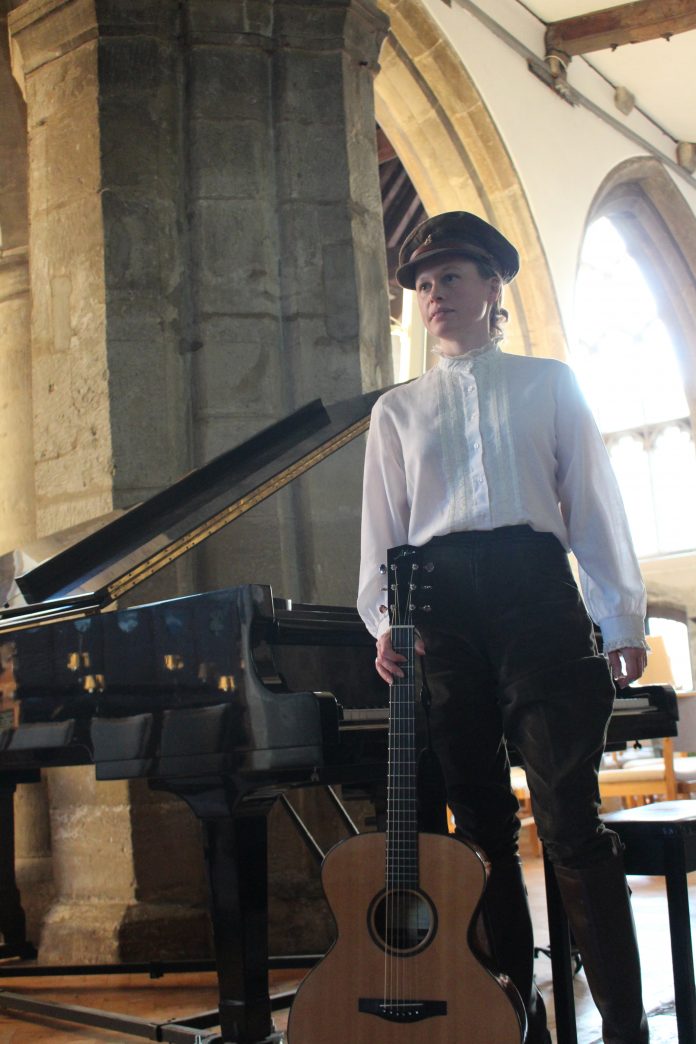 Based on extensive research and combining live and recorded sound, this show promises to be a theatre concert like no other; a rich visual and auditory experience that truly connects the audience with the past

Jordan says, “This one-woman performance will be very different to most concerts: it will be enhanced by technology as I play pre-recorded sound tracks to bring the words of the women and the sounds they experienced to life around the songs I have written. I will also present images of the women and I will be in costume to help the audience visualise the stories.”

‘No Petticoats Here’ tells the real life stories of varied and remarkable women of the Great War through song and was inspired by the story of Dorothy Lawrence; an orphan whose guardian lived in Salisbury Cathedral Close. Dorothy dressed as a soldier in order to visit the Western Front and pursue her journalistic ambitions. Louise quickly became fascinated by the stories of female ambulance drivers, scientists, footballers and spies.

No Petticoats Here is the culmination of twelve months of research that has taken Louise to the battlefields of France and Belgium including the Somme and Ypres as well as countless museums and historic research centres. Through contact with the relatives and biographers of some of these extraordinary women Louise has been able to add greater depth and detail to their stories bringing to life their courage and compassion.

Now a familiar face on the UK music scene, Louise Jordan has used her classical music background and her seven years’ experience of touring arts centres, theatres, folk clubs and festivals in the UK and Europe alongside her earlier career as a secondary school history teacher to produce No Petticoats Here.

“The First World War too often remembers women as the mourners of the fallen, as frugal housewives ‘making do’ or angelic nurses caring patiently for the men who returned from the Front Line. Through No Petticoats Here I remember some of the many women whose stories do not fit conveniently into boxes and whose experiences are both astonishing and relatable one hundred years on.”

From the driving, rhythmic piano of ‘Queen of Spies’ which captures the story of the charming and bold Frenchwoman Louise de Bettignies, to the intensely personal ‘Mairi’ about the disintegration of a devoted friendship, this is an album as musically diverse as the women’s stories it tells. ‘Ripple and Flow’ captures Hertha Ayrton’s patient pursuit of change through her scientific achievements, the elegant interweaving clarinet and piano mirroring the ebb and flow of the water motions she studied. By contrast the resolute march of the army of women workers ‘Toil, Women, Toil’ is accompanied by a single snare drum.

Waterside Arts Centre is situated at 1 Waterside Plaza, Sale M33 7ZF and Louise will perform there on Thursday 14th September 2017 at 7.30pm. Tickets cost £9 (£7 concessions) and are available from the box office 0161 912 5616 and at www.watersideartscentre.co.uk.

Censorship and the working class reader – an event celebrating the bicentenary of William...