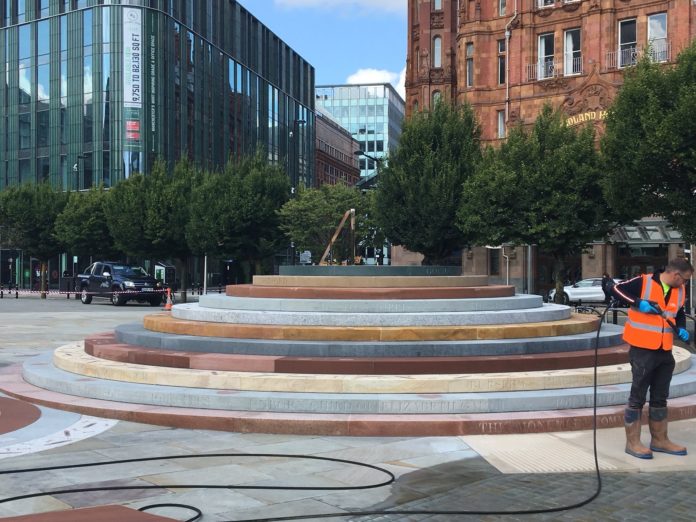 It cost a million pounds and has already caused controversy over disabled access but yesterday Jeremy Deller’s monument was unveiled without nobody there to see it.

Three days before the 200th anniversary the six-foot “hill” constructed of concentric steps made from stone sourced from all regions of the UK and other parts of the former British empire has been unveiled close to the spot where eighteen people were killed and hundreds were injured when crowds in their Sunday best gathered to hear speeches calling for Parliamentary reform.

Paul Fitzgerald, chair of the Peterloo memorial campaign told the Guardian  said the council had been left in “this embarrassing, awkward and weird situation” by failing to properly consult people on the design of the monument until it was too late.

”“The fact that there’s this strange embarrassment and nobody really wants to go anywhere near the memorial is a testament to their lack of democratic participation. I cannot think of a single excuse for them leaving the announcement of the design until so late that it couldn’t be changed and that’s a mockery of the democratic process and we’re extremely angry with them about it.”

Councillor Luthfur Rahman, Executive Member for Skills, Culture and Leisure for Manchester City Council, said: “The Peterloo Memorial will be a fitting and lasting commemoration of the dramatic events of 1819, when people striving peacefully for democracy were killed and seriously injured, and their wider resonance in the struggle for better conditions.

“The spirit of radicalism which was present on that day is still woven into the thread of the city’s character and we believe this memorial will a visual depiction of that.”

The memorial will be the backdrop on Friday 16 August, the 200th anniversary of Peterloo, to a day of events in the forecourt of Manchester Central, close to the site of St Peter’s Fields, from 12pm to midnight which marks the culmination of a three-month programme of commemorative events. This event, says the council,rather than a more formal civic unveiling ceremony, marks the official opening of the memorial.

Communities, artists and musicians from across Greater Manchester and beyond will be gathering for a day of performances. As night falls, photographer Red Saunders’ Hidden Tableau Peterloo Massacre images will be projected onto Bridgewater Hall.