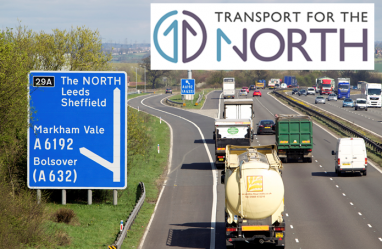 Transport for the North has revealed, for the first time, details of how it will create England’s first pan-regional Strategic Transport Plan.

The plan, being created to boost economic growth in the North and improve road and rail links, could help create close to a million new jobs and add £97 billion to the economy.

The announcement comes after Greg Clark, the Secretary of State for Business, Energy and Industrial Strategy said he recognised the need for more powers and budget to support devolution and local decision-making – especially in the area of infrastructure.

The recent Government Green Paper, Building Our Industrial Strategy, states that ‘Regional strategic transport bodies, such as TfN and Midlands Connect, will help ensure that transport projects are more closely linked with economic priorities, and so really benefit people across communities.’

Central to TfN’s Plan is applying joined-up thinking to issues and challenges that, up until now, have only been tackled by individual local transport authorities.

With one strategic transport authority identifying and prioritising opportunities across the North, using intelligence gathered from new research to identify where investment will perform best, David Brown, Chief Executive of TfN, believes the Plan has the potential to deliver massive returns on investment.

David said: “I welcome Greg Clark’s recent comments about greater powers and investment in relation to infrastructure, both of which will be key elements in making our Strategic Transport Plan for the North perform at its best.

“Until now we have been largely working behind the scenes, gathering evidence and working with our partners to identify what needs to be done to create a plan for the North capable of delivering transformational change.

“If we are going to compete effectively with other countries then we need to unite behind a well thought through strategy that has the support needed for effective delivery. We are currently engaged in that process. We are bringing together a strong set of proposals which, we believe, have the potential to not only transform the travel experience in the North, but also add close to £97billion and almost a million new jobs to our regional economy. We will be publishing our draft proposals for public engagement in the autumn.”

Since March last year, TfN has been commissioning research across a number of key areas to inform its Plan.

These include a report on international connectivity outlining how better transport links across the North could unleash significantly greater opportunities for international trade and travel and a major new freight and logistics report showing the potential for ports and airports to play a greater role.

Both are supported by further evidence from an independent economic review that identifies key strengths and capabilities across the north.

“This is an approach that has already been tried in other parts of the world with great success,” said David. “There is now a collective will in the North and in Government to make this happen and it is something we can all get behind.”

“The hope is that the days of places like Carlisle and Newcastle bidding for transport investment funds in isolation when there is clearly a common interest will quite simply be over. Local transport authorities will still have their autonomy. We are not there to trample on their territory, quite the opposite; we are there to identify where there is added value and simply join the dots.”

“All of the work to date is helping to inform the development of TfN’s integrated road and rail strategies which, together with a number of other work programmes, will inform and shape the development of the North’s first Strategic Transport Plan. This plan will last until 2050 and beyond providing long-term visionary thinking that can transform the northern economy.”

The road and a rail programmes will form the backbone of the Plan and include a mix of initiatives aimed at easing congestion, reducing journey times and making the movement between the economic centres of the North as fluid as possible.
TfN is currently identifying strategic road routes in the North which are important for economic development. TfN is also working with Highways England and the Department for Transport on three Strategic Road Studies, looking at proposals to improve east-west road connections in the North.

TfN is developing proposals for the Northern Powerhouse Rail network which will link together six of the North’s major cities and Manchester International Airport with faster and more frequent rail connections. TfN is also working with Network Rail to identify improvements needed to the existing rail network in the North.
TfN’s Major Roads and Major Rail reports will be published in late spring and will inform the Strategic Transport Plan for the North, an initial draft of which will be published for public engagement in the autumn.