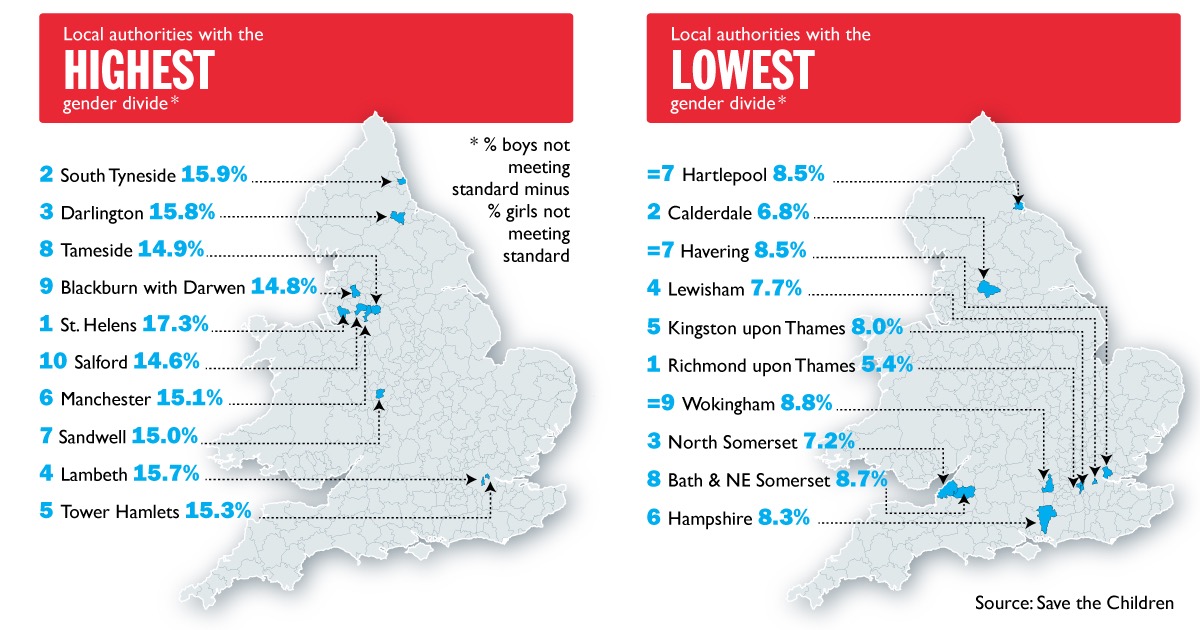 Thirty three per cent or one third of boys in Manchester will not be able to speak a full sentence when they are start school according to a devastating national report released today by Save the Children.

The report, the Lost Boys,  lays bare the potentially devastating and lifelong consequences for boys in England who start school significantly trailing girls in basic early language skills with Manchester, Tameside and Salford local authority areas in the top ten of the most divided areas in the country.

Boys are nearly twice as likely as girls to have fallen behind by the time they start school, with the leading children’s charity projecting that if the results of the past ten years are repeated then nearly 1 million boys will be at risk over the next decade unless quality early years education is in place across England.

The report highlights that last year alone, 80,000 boys in England started reception class struggling to speak a full sentence or follow simple instructions. Based on newly commissioned research from the University of Bristol, ‘The Lost Boys: How boys are falling behind in their early years’ finds that being behind on the first day of school is often an indicator that these boys will stay behind, potentially for life.

While this underperformance is an issue for all boys across all ethnicities and social groups, it is boys in poverty who are falling the furthest behind. The stark reality is that a staggering 40% of the poorest five year old boys are falling below the expected standard in early language and communication.

The report reveals that those already behind at five are four times more likely to fall below expected standards of reading by the end of primary school than those who started school on track. Many struggle to catch up, do well at school or succeed in the world of work. Boys’ social skills, relationships and behaviour are also affected when they fall behind at five. In the longer term, struggling in the early years damages their life chances, employment prospects and health outcomes.

The report states that contributing factors identified include children’s experiences at home, at nursery and in the community. It also highlighted that boys are less likely to participate in activities such as story-telling and nursery rhymes which both develop language. They are also less likely to learn to stay focused on a task or have the concentration, motivation and self-confidence to learn. These are crucial in helping children to read and write.

The research identifies a silver bullet, in good quality early years education, which has the biggest impact in preventing children from falling behind and therefore closing the early gender gap, giving both boys and girls equal opportunity to fulfil their potential.

Save the Children is calling on the UK government to support the development of a well-qualified nursery workforce, with a qualified early years teacher in every nursery, starting in areas with large numbers of poor children first. Early years teachers help to identify the children who are falling behind and support them to catch up.

Gareth Jenkins, Director of UK Poverty, Save the Children said:

“Every child deserves the best start in life. But in England, too many children, especially boys, are slipping under the radar without the support they need to reach their potential. They’re falling behind before they even get to school and that puts their life chances at risk. In 2016, this is unacceptable. A whole generation of boys is being failed”