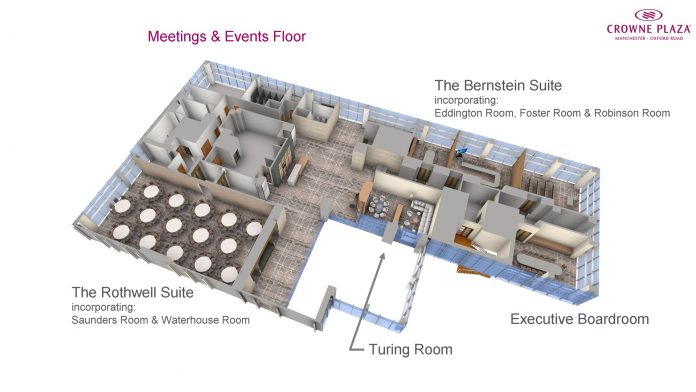 Lots of celebrities, prize-winning academics, actors, artists, architects and scientists have worked and studied at the University and UMIST down the years – the two institutions combined in 2004 to form the current University of Manchester – a list that also includes prominent politicians, business leaders, athletes and more.

And the new Crowne Plaza hotel, part of the city’s first ‘Double Decker’ hotel, based in the university district on Oxford Road, has paid tribute to these – the city’s finest former students – by naming their meeting rooms in their honour.

Crowne Plaza general manager Andrew Fletcher said: “We thought long and hard about the right kind of names for our meeting rooms.

“However, as we are based in the heart of the university district, Manchester’s academic quarter – right on the Oxford Road corridor – it became clear very quickly that there was a real desire to honour these former University of Manchester alumni who have each made such a huge contribution to the reputation of this city as a place where academics thrive.

“We’re hoping that, once open to the public, these seven stunning new meeting rooms and the incredible people they are named after, may help inspire new creativity in those who conduct their business inside them.

“We’re delighted to be able to pay tribute to such an esteemed list of luminaries in this way – it really helps cement our bond with the city and the university district we call home.”

Sir Howard Bernstein said: “It’s a real honour and humbling to be recognised in this way, especially alongside such a notable list of Manchester alumni.

“The Oxford Road Corridor is a hugely important area for innovation and academia in the city, and is increasingly home to institutions, businesses, start-ups, and innovators who are part of Manchester’s exciting future. Its brilliant to see the new Crowne Plaza and Staybridge Suites providing much-needed visitor accommodation for those who visit this exciting area of the city.”

The 19-storey Crowne Plaza and Staybridge Suites will open to the public in Spring 2018.

While the Crowne Plaza will contain 212-rooms over 11 floors, a 120-cover upscale restaurant, seven meeting rooms catering for over 200 delegates and a gym. Staybridge will have 116-rooms on the eight floors directly above and offer a warm, social and home-like environment through a mix of studio and one-bedroom suites.

The dual-branded Crowne Plaza and Staybridge Suites – not something that has been offered to people staying in Manchester before – is situated on The Oxford Road Corridor, an innovation district running south from Manchester city centre that is home to 70,000 students and a workforce of 60,000 people.

Alan Turing is considered to be the father of modern computing and artificial intelligence. His concept of the Turing machine is still one of the most widely examined theories of computation. After the Second World War Turing worked on the design of the ACE (Automatic Computing Engine) at the National Physical Laboratory.

Sir Arthur Stanley Eddington was a British astronomer, physicist, and mathematician of the early 20th century who did his greatest work in astrophysics. The Eddington limit, the natural limit to the luminosity of stars, is named in his honour. He is famous for his work regarding the theory of relativity.

Norman Robert Foster, Baron Foster of Thames Bank is an English architect whose company, Foster & Partners, maintains an international design practice famous for high-tech architecture. In 1999 he was awarded the Pritzker Architecture Prize, often referred to as the Nobel Prize of architecture.

Sir Robert Robinson was an English organic chemist and Nobel laureate recognised in 1947 for his research on plant dyestuffs and alkaloids. In 1947, he also received the Medal of Freedom with Silver Palm.

Former Chief Executive of Manchester City Council Sir Howard Bernstein is an Honorary Professor of Politics at the University. He is also a part-time advisor to the University on government interactions, healthcare delivery, devolution, culture and international links, along with continuing as Chair of the Manchester Academic Health Science Centre. He is credited with playing a major role in the city’s rebirth following the 1996 IRA bomb, brokering Manchester City Football Club’s investment in east Manchester, championing the Metrolink and bringing the 2002 Commonwealth Games to the city, which was rewarded with a knighthood. City Football Group have recently confirmed the appointment of Sir Howard as a strategic development advisor to support the next phase of community, commercial and development initiatives in and around the Etihad Campus.

Alfred Waterhouse was an English architect, particularly associated with the Victorian Gothic Revival architecture. He is perhaps best known for his design for Manchester Town Hall and the Natural History Museum in London.

Teenage photographers capture life in Salford through their eyes